Another archaeological site in Georgia being destroyed

Another archaeological site in Georgia being destroyed 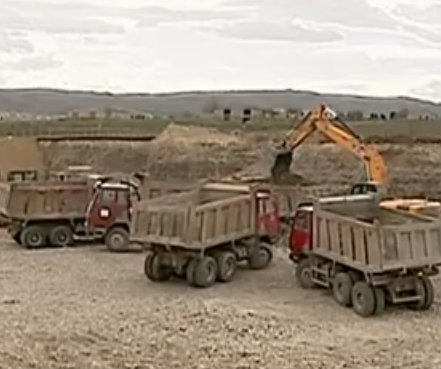 TBILISI, DFWatch–Another historical object allegedly more than 6,000 years old is believed to be destroyed by a construction company.

In a report by the TV channel Rustavi 2, archeologist Iulon Gagoshidze tried to raise the alarm about excavation work at Beri Kldeebi settlement, which lies at the mouth of the river Prone about 30km west of the town Gori.

In the report, he claimed that the object is no less important than the Sakdrisi gold mine, where scientists and environmental activists are trying to halt the open-cast mining. A Russian mining company has already destroyed the archaeological parts of the Sakdrisi site where there are more than 5,400 years signs of human activity.

Gagoshidze, who in 2008 was diaspora minister, claims that the Beri Kldeebi site contains traces of the Uruk culture that date back before the Sumer civilization. He also claims that bulldozers and tractors have destroyed graves.

The archeologist says he has appealed to the state agency for protection of cultural heritage, and that they assured him that the work at Beri Kldeebi would stop. But it didn’t stop, and both the agency and the archeologist were tricked.

Footage taken by Rustavi 2 TV shows how a tractor destroyed what may have been a burial place containing archeological artifacts. Some pottery was rescued from the site and brought to the National Museum, where one of the archeologists working there, Mindia Jalabadze, explained that the items may be more than 6,000 years old.

The news report named the company as ‘China Nuclear Industry’ and said the gravel excavated there is used for construction, but their employees avoid talking with journalists, Rustavi 2 claimed. The gravel is being used to build the Tbilisi-Senaki-Leselidze highway.

Irakli Khergiani, who is manager of the construction project, claims that the Environment Ministry has issued a permission to carry out excavation work and the company has a proper license.

The Culture Ministry now says it is necessary to study the site before granting such a permission, but no study has been conducted at Beri Kldeebi and the license was issued in violation of law, according to the ministry.