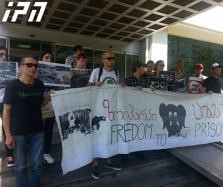 TBILISI, DFWatch–A group of animal rights activists demonstrated Sunday outside City Hall in Tbilisi, demanding to shut down the zoo, after a flood killed more than 50 percent of the animals held there, and others escaped.

The demonstration was organized by Vegan Georgia and a few dozen people carried posters saying ‘Zoo is jail’ and ‘We don’t want zoo’.

Activists believe zoos are just for entertainment and that animals are made to suffer. It is possible to study about animals from the Internet, they argue.

The activists believe the zoo in Tbilisi offered the animals terrible conditions, and should have been shut down years ago.

They also think the best solution would be to create an animal reserve outside of Tbilisi, where they will have proper conditions.

Even though only up to 30 people came to the protest, an online petition has gathered more than 1,500 signatures demanding to shut down the zoo.

“In a country where animals can’t be treated right there should not exist any zoo,” the statement reads. “Beasts shouldn’t spend their lives in the city when they are meant to be in tropics or tundra.”

When it comes to the animals that escaped from the zoo on the night of disaster, one tiger and one hyena are still missing. Over the last few days, there have been tens of reports to the emergency call center from citizens suspecting that they have seen an animal, but none of them were proven correct.

Two days ago, a white tiger, that also escaped the zoo, attacked a man working in a warehouse, who died from his injuries. The tiger was put down.

The Georgian government is now considering the possibility of building a new zoo at a location next to Tbilisi Sea, the largest lake near the capital.