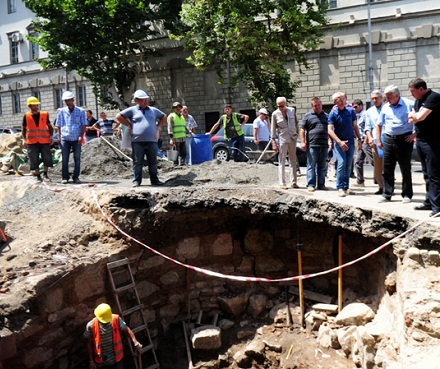 A historic find was unearthed in Tbilisi, underneath the main thoroughfare. (IPN.)

TBILISI, DFWatch – An ancient wall has been discovered during rehabilitation works in the center of Tbilisi.

The oldest layer of the fence dates back to the fifth century C.E., but the castle fragments, which are perfectly retained, were built between the twelfth and thirteenth century.

Tbilisi City Hall started rehabilitation of Pushkini Street, which connects to Freedom Square in the center of Tbilisi. Workers discovered ruins during excavation work, and also found dishes and stones which were used for war purposes.

Georgia’s historical sources mention this wall fence, so discovery hasn’t been completely unexpected. Many sources describe it, while it is perfectly described in first atlas in 1735, which was created by the Georgian cartographer Vakhushti Bagrationi Batonishvili, a geographer and historian.

“This is a very important discovery. To speak about these stones – enemies uses to destroy the fence with them, while people repel from enemies by throwing those stones from the fence,” Merab Dzneladze, Georgian archeologist says.

The historians says this wall fence was destroyed in 1801 during the annexation by the Russian Empire.

Tbilisi City Hall informs that the wall fence is in the process of conservation. When works will be finished Georgian citizens and tourists will be able to see the new discovery.

Work is still ongoing. Two more towers were discovered which are part of the wall fence.

“As result of works two more towers were discovered, which are identical with their forms. We continue works interested what we will find more,” representatives of Tbilisi Development Foundation said.

Because of the archeological work, traffic has been blocked on Pushkin Street for two weeks; a main thoroughfare in the capital.