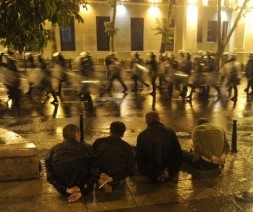 The police brutality on May 26, 2011, is criticized by Amnesty for having been insufficiently investigated.

The Saakashvili regime has renewed the country’s law enforcement personnel since seizing power in 2003, and is touting the reform as a model for other countries. But Amnesty points out that incidents of police brutality against democracy campaigners have been ignored.

“The authorities had still failed to carry out effective investigations into allegations of the excessive use of force by law enforcement officials during demonstrations in 2009 and 2007,” a new report says.

The Amnesty report is published annually and deals with the human rights situation in the countries in the world. The part about Georgia mainly focuses on four issues: the aftermath of armed conflict, internally displaced people, freedom of assembly and the court system.

Particularly two cases are looked at: the first, a peaceful rally of war veterans in January 2011, which was dispersed. The second one, on May 26, 2011, when an anti-government rally also was violently dispersed, this time not only by policemen, but also by a motley crowd of vigilantes dressed up to look like police.

The police operation against veterans on January 3 led to eleven arrests. All were fined 400 lari, or about USD 240, for what is called hooliganism.

“The police officer seen hitting the woman was dismissed and an investigation initiated. However, by the end of the year, the investigation had not produced any results,” Amnesty writes.

May 26 is Georgia’s Independence Day. The government was planning to hold a parade to celebrate the day, but the previous night thousands of people had gathered in the middle of the road in front of parliament where the parade was to take place, in an attempt to force the Saakashvili regime to step down.

At midnight police arrived and dispersed the rally shooting rubber bullets and beating those present with batons. There were at least four deaths. Many were beaten to a pulp. The rights of journalists were also violated.

Many foreign media outlets that seem to only rely on the regime’s sources incorrectly report that there were two deaths and that this was a pure police operation, when in fact it was not; the regime’s five thousand strong force also included vigilantes that had been given jackets that said “POLICE”. Local journalists afterwards tried in vain to get an answer from the authorities about who these people were who had dressed up like police, but some of them were identified in photos as belonging to an unofficial paramilitary force based near breakaway South Ossetia.

As to Amnesty’s report, it notes that detainees were not given a chance to inform their families about what had happened to them. Many were reported missing because of this, and when two corpses suddenly turned up on a rooftop the high number of secretly detained persons sparked a fear that more people might have died.

“More than 105 demonstrators were arrested and later sentenced to up to two months’ imprisonment for resisting the police. The families of the detained only learned of their arrest two days later, following inquiries made by the Ombudsman.”

The official investigation into the deaths is met with suspicion by locals and human rights groups. When it comes to the Interior Ministry’s investigation into police brutality, it resulted in only mild sanctioning against most of the offenders, although four police officers were fired.

Amnesty also criticizes violations in the two breakaway republics Abkhazia and South Ossetia, which most of the world considers part of Georgia. There were held several elections lately, both for president and parliament. Abkhazia held a parliamentary election in two rounds, while South Ossetian elections was in deadlock at late 2011. It took four elections in order to elect new de-facto president.

Amnesty International reports about harassment and violence in South Ossetia during the elections. The report also deals with people’s ability to move between the conflict areas.

“Some progress towards greater security was made and detainees were exchanged under the internationally mediated Incident Prevention and Response Mechanism, bringing together the Georgian and South Ossetian sides,’ it says,

‘however, incidents of shooting, injury and the detention of civilians for the alleged illegal crossing of the Administrative Boundary Line between South Ossetia and Georgia were reported throughout the year.”

As for IDPs, the report draws attention to the resettlement of refugees from their temporary living quarters in Tbilisi and out to the regions, which is called a violation of local and international standards. In this process hundreds of families were affected.

“Those evicted were offered alternative accommodation outside the capital, mainly in rural areas. Aspects of the right to adequate housing – such as access to employment and sustainable livelihoods – were not always respected.”

DF Watch reported about refugees being resettled to villages far away from Tbilisi. People who had lived in the capital for more than 15 years were put in a difficult situation, as they aren’t used to village life, and there is no job for them there, and no proper conditions.

Meanwhile, those still living in Tbilisi report about being warned that they will soon be resettled from their houses.

A number of protests and requests to meet with appropriate officials have been unsuccessful.

In his latest annual report on the human rights situation, Georgia’s Public Defender described a difficult situation of refugees and people living near the zones of conflict.

The lack of independent courts remains the central problem in Georgia’s justice system, according to Amnesty International.

“After visiting Georgia in June, the UN Working Group on Arbitrary Detention raised concerns regarding aspects of the justice system, including the role of prosecutors, an extremely low acquittal rate and the excessive use of pre-trial detention.”

There is nothing about the difficult situation of prisoners and conditions in jails and jail hospitals, a topic the Ombudsman dedicated 300 pages to in his latest report.

Death, health-care, everyday life, cases of torture and mistreatment at prisons are described in detail in that report.