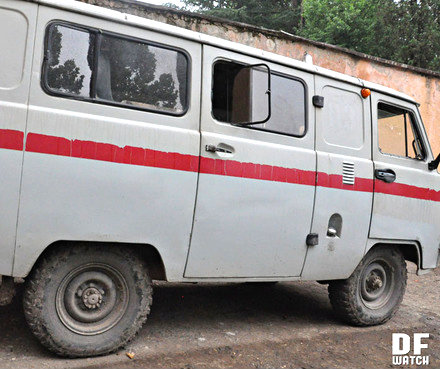 The ambulance at the hospital in Kharagauli. (DF Watch.)

In many cases, especially in villages and regions outside of population centers, ambulances arrive too late and the patient dies.

In the beginning of August, witnesses called for an ambulance for a woman in Ureki near Poti, but after waiting in vain for more than an hour, she was then taken to hospital in a taxi where she later died. Witnesses say they called four times but the ambulance never came.

Later it turned out that the ambulance was at a garage being repaired, and there were no other cars available.

On Friday, Deputy Health Minister Zaza Sopromadze said that a large part of the available ambulances are too old and need to be replaced. The ministry plans to buy 220 new cars.

He said that in December, 2013, the emergency service was made subordinate to the ministry. Before that, they were run by insurance companies. At the time of the transfer, 80 percent of the ambulances were in a bad condition and needed fixing almost every day. The most common reasons for why ambulances are late is that the cars are too old, he explained.

The ministry also informs that emergency crews will arrive first on the place where the case is more severe and calls will be categorized, which means that phone operators will have to categorize cases due to severity for which they will have special trainings in advance.