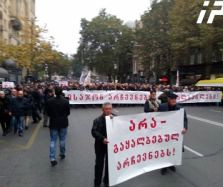 TBILISI, DFWatch–The opposition party Alliance of Patriots on Sunday demonstrated in Tbilisi, demanding the resignation of two ministers because of election fraud.

Several hundred people took part in the demonstration, which started at the Rustaveli statue and ended up outside the parliament building.

Alliance of Patriots, a party without representation in parliament, fielded candidates in both the two districts that held by-election last Saturday, but lost.

Party leader Irma Inashvili, who was a candidate in Sagarejo, accused the Georgian Dream coalition’s candidates of personally participating in election fraud in that district. “We witnessed it,” she said.

According to the Central Election Commission, Inashvili received 6,981 votes in Sagarejo, but lost to the Georgian Dream candidate Tamar Khidasheli who garnered 7,540 votes.

Inashvili declared that she will begin a hunger strike, along with several other party members.

She said Sunday’s protest is the beginning of a ‘large-scale movement’ and demonstrators will gather every day from 14:00 until evening.