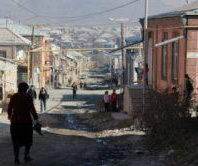 TBILISI, DFWatch–The Akhalkalaki-based news agency Jnews reports new details about a murder of an alleged mobster one week ago.

Sargis Hakobyan was found dead in his car near the village Aragva on 26 July. It is believed that his car was ambushed near the village and riddled with fire from an automatic rifle. He died of multiple gunshot wounds.

Hakobyan came from Khando, a village near Akhalkalaki. He had taken up permanent residency in Moscow, where he was a known ‘criminal authority’, but occasionally visited his native village, and was popular there.

“He was a man of gold. He used to help the villagers. He had money, so they killed him,” an elderly woman told Jnews.

Approximately one thousand people attended the funeral of the crime boss, including guests from Russia and Armenia.

A 35-year-old man was arrested by the Akhalkalaki police in connection with the crime. Although the details of the investigation have not been disclosed, locals say that the arrested man is a native of the village  Gandza near Ninotsminda.

Locals in Gandza have suggested that the reason for the murder was a vendetta between the two crime bosses.