Alasania planning rally against ‘authorities obedient to the informal governance’

Alasania planning rally against ‘authorities obedient to the informal governance’ 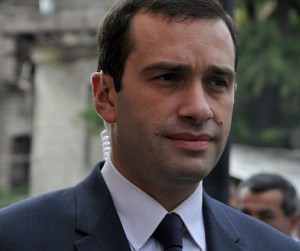 Tbilisi, DFWatch – Free Democrats of former Defense minister Irakli Alasania announce a rally on Saturday to protest ruling of the Tbilisi City Court by which 5 officials have been sentenced to 7 years in prison each.

Free Democrats will switch to ‘emergency mode’ and will displace ‘authorities obedient to the informal governance’, stated Irakli Alasania at the briefing at the party office on Monday, after the court ruling.

“We’ll resort to all means for the release of these people via constitutional and legal ways, including rallies,” – Alasania said.

Five Defense Ministry officials who were detained in 2014 on embezzlement charges and released on the basis of personal guarantees from several MPs, have been sentenced to 7 years in prison each by Tbilisi City Court on Monday.

The five worked at the Defense Ministry under command of Irakli Alasania, who views accusations against them as a personal revenge of Bidzina Ivanishvili, his former ally. Free Democrats, as well as other opposition groups and part of civil society, accuse Ivanishvili, former PM, of being an informal ruler through his immense sway over ruling Georgian Dream party and members of government.