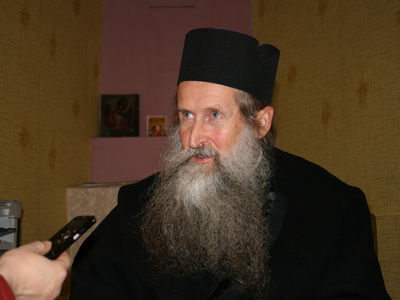 TBILISI, DFWatch–The Alania diocese, which covers the area of the separatist region South Ossetia, is facing an uncertain future after law enforcers for the breakaway republic confiscated the ‘passport’ of the head of the diocese.

The ‘passport’, which is required for travel to the region, was taken from bishop Ambrosi on Wednesday, as he was crossing the border with Russia at Roki tunnel.

Consequently, the bishop can no longer visit the parish that he helped establish thirteen years ago.

The officers offered no explanation, and no further details of the incident have been released.

The incident was preceded by bitter row between the bishop and Anatoly Bibilov, South Ossetia’s de facto president, over the attempt to merge the Alania diocese with the Russian Orthodox Church. The bishop has vehemently opposed the merger, advocating instead his diocese’s independence, while Bibilov has repeatedly called for the South Ossetian church joining the ROC.

The conflict started last fall as Bibilov returned from Moscow after meeting with Patriarch Kirill, the head of the ROC. When Bibilov came back in November, he held meetings with clergy and parishioners of Alania diocese and invited them to join the ROC. After being rebuffed, an irritated Bibilov left the diocese and pledged not to cross its threshold ever since. In April 6, he took part in the Orthodox Easter service at the chapel of the 58th Russian Army, stationed in South Ossetia, Ekho Kavkaza reports.

Alania diocese was formed in 2005 on the territory of two canonical dioceses which belong to the Georgian Orthodox Church. Since the territory was under the control of Tskhinvali, the Georgian church had no leverage to interfere. However, the newly formed diocese has not been able to establish canonical ties with either of the major Orthodox churches. Even the Russian church refused to recognize it, which would be viewed as a blatant breach of policies and practice of Orthodox churches around the globe.

Hence, Alania diocese had to group itself with noncanonical churches and chose the Orthodox Church of Greece, Holy Synod in Resistance, which split from Greece’s state church.

Although the Georgian Patriarchate has lost its jurisdiction over South Ossetia, it retains three churches in Akhalgori, which is populated predominantly by ethnic Georgians. The Georgian priests serving in these churches have continuously been targeted by Tskhinvali. Archbishop Isaia Chanturia, the head of Nikozi and Tskhinvali diocese, was stripped of the documentation needed to enter the territory of the breakaway republic, hence he, as well as other priests, had to stay in Akhalgori for about nine years, from 2008 till 2017, during which time they were unable to return to Georgia proper.