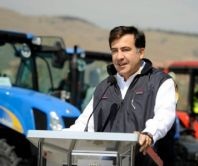 President Mikheil Saakashvili has brought in tractors, but his strategy has feiled to create more jobs in agriculture. His tourism strategy has also failed, the report says.(IPN.)

TBILISI, DFWatch – A new report shows that President Saakashvili turned his back on Georgian farmers in order to develop tourism, but the strategy failed.

Six out of ten employed persons in Georgia are self-employed. More than 50 percent are employed in agriculture, a sector which is responsible for 9 percent of the country’s GDP.

These are some of the findings in the report ’20 Years of Independence’, prepared by Liberal Academy Tbilisi.

It opens with a brief look at the period before the Rose Revolution in 2003 and then presents an analysis of statistics, tables and interpretation of the period afterwards, based on data from local and international organizations.

Even though the current government’s focus is to make Georgia into a tourist country, it was always considered an agricultural country. If we look at numbers from 1996, agriculture’s share of GDP was 33 percent, while in 2010 it was 7.3 percent.

According to the report, small business produce 80 percent of agricultural products, but only 8-10 percent makes it to the local market. The rest goes to subsistence.

According to data from the International Monetary Fund, the level of unemployment in Georgia was 16.2 percent in 2011 and has not changed significantly for four years.

But the majority of the employed people are working in the agriculture sector. These people are self-employed. They do not sell what they cultivate, but consume it themselves.

The report says that Georgia is in first place in regards to self-employment among post-Soviet countries.

The number of unemployed is four times higher in cities than in villages.

In 2010, about 62 percent of those employed, were self-employed, according to GeoStat, the Georgian Statistics Department.

Among those who are employed at a workplace, only 31 percent live in villages.

For reasons of survival, many people chose to leave Georgia in order to work abroad and send the money back to their family. Georgia does not publish official migration statistics. There are however some estimates made by the World Bank.

People who live abroad and send money back to their family contributed 9.2 percent of the country’s GDP in 2011, according to Georgia’s National Bank. But this figure only includes money transferred through banks. Since people often send money by giving it to someone who travels by bus to Georgia, or some other ways, the real extent of remittances is larger.

When it comes to tourism, the government’s priority, the study shows that a majority of visitors to Georgia come from neighboring countries: Turkey – 26.2 percent, Azerbaijan – 25.3 percent, Armenia – 24.8 percent, Russia – 9.9 percent, other countries 13.8 percent.

The number of visitors increased after Georgia established visa-free rules for more than 80 countries in the world. Also, in February 2011, Georgia canceled visa rules with Russia, which increased the number of Russian visitors.

The goal of the government is to create more jobs by helping the tourism sector develop. But according to the statistics presented in the report, there is no growth in the number of jobs in the hotel and restaurant sector. On the contrary, in 2011 it fell by 11 percent.

But the problem is that there is no method for determining how many of the visitors who were tourists. Many who enter are on business visits, and many are Georgians coming back from visits to other countries. Since all of these are counted as tourists, the official data does not reflect the realities in terms of tourism.

The situation in the labor market hasn’t changed for the last 15 years, the report says.

“Half of the Georgian labor force is related to agriculture, which has an influence on poverty. The libertarian economy policy doesn’t foresee any specific sectoral policy in the agriculture sphere and leaves the development of this sector to the market,” according to the report.

“The economic policy, which wasn’t able to create development opportunities for the sector in which half of the population is employed, failed in social terms,” the authors argue.

There were several attempts to implement projects in the agriculture sector. But most of the government’s programs are short-term and there has not been observed any growth in jobs recently.

The report speaks about a paradox: if the government intervenes in agriculture sector, which is important to a majority of the population, it is considered anti-market policy. But the government’s policy towards tourism in fact replaces the private sector, and in most cases the initiator of tourism oriented programs is the government.

However, in his latest speeches, the President Mikheil Saakashvili has promised to focus on this field and help agriculture develop. His has been saying this more frequently after his main opponent, Bidzina Ivanishvili, promised to establish a one billion lari fund to support agriculture.