Activists throw eggs and tomatoes at UNM office on anniversary

Activists throw eggs and tomatoes at UNM office on anniversary 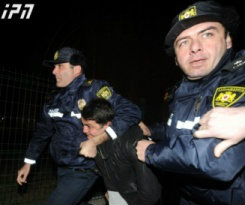 TBILISI, DFWatch–Two people were detained during a demonstration against the National Movement in Tbilisi on Sunday.

The demonstration took place outside the party’s office and was held in connection with the 11 years anniversary of the Rose Revolution, which brought it to power under its leader Mikheil Saakashvili.

Demonstrators claim that far from being a positive step in the country’s history, the peaceful coup on November 23, 2003, marked the start of a destructive process in the country.

Activists from the group Free Generation also accuse the National Movement of trying to destabilize the country after they lost power, and demand that it is outlawed.

Some weeks ago, they clashed with Free Zone, a youth group of National Movement supporters.

Yesterday, they brought dried roses and two persons were detained on suspicion of hooliganism for throwing eggs. Also tomatoes were thrown at the National Movement office, according to Interpressnews.