Activists in Georgia demand to have justice restored

Activists in Georgia demand to have justice restored 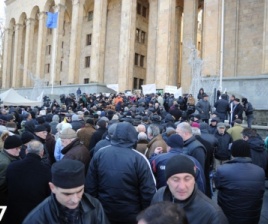 Activists are putting pressure on the government to create a committee to right the wrongs of the Saakashvili regime. (Interpressnews.)

TBILISI, DFWatch–Activists on Sunday gathered in front of the old parliament building in Tbilisi demanding the creation of a committee to go through miscarriages of justice during former President Saakashvili.

The demonstration was organized by the organization Former Political Prisoners for Human Rights and the reason was a decision by the government to postpone the creation of a commission to determine miscarriages of justice in the past.

Prosecutors in Georgia are currently studying more than 18 000 complaints from people who say they were subject to injustice during the years former president Mikheil Saakashvili was in power. More than 9 500 cases are actively being pursued.

The sheer amount of complaints is putting an insurmountable work load on the system, and a further problem is that it would be costly for the Georgian state to recompense all the wrongs people may have suffered. Compensating the property taken from people under pressure – which is the most common complaint – would cost about four billion lari, or 2.3 billion US dollars, according to the country’s ombudsman, who keeps receiving more than five hundred new admissible complaints per month, mostly regarding things than happened under Saakashvili.

Georgian Dream, the coalition now in power, made promises during the 2012 election campaign to clean up the transgressions of the former regime, and a proposal is being discussed to create a commission to handle the process, but it was recently put on hold. Nana Kakabadze, leader of Former Political Prisoners for Human Rights, says they demand that the government fulfills its election promises.

“This was a violation of rights of people who were unfairly punished, and those who were punishing these people for nine years must be held responsible,” she said.

If their demand is not met participants warn that they will demand an unscheduled parliamentary election.

Kakabadze, who addressed the rally participants, said that they will use all means to get the process of restoration of justice started in Georgia. She said this may require organizing a series of protest rallies. Kakabadze called on relatives of prisoners to act if they think that their relatives were put in prison illegally.

A camp was set up at the old parliament building to register people who demand to restore justice and those who also demand to create a commission the mission of which is to determine miscarriages of justice.

November 28, Minister of Justice Thea Tsulukiani said that the government has decided that the country is not yet ready to create a miscarriage of justice commission. She said no-one is against creating it, but financial, economic and other conditions must be carefully reviewed before this is done.

“There are consultations about this issue and when we will see that we are ready, the process will move on,” she added.

Her statement caused nearly 150 prisoners to go on hunger strike.