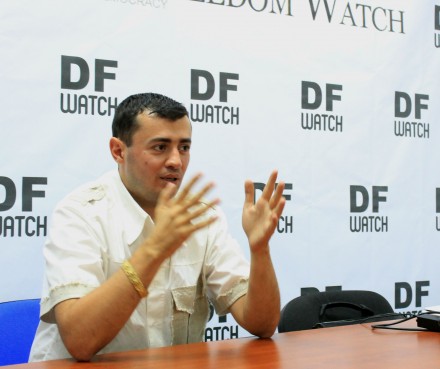 TBILISI, DFWatch–Russia has stepped up efforts to use ‘soft power’ in Georgia through state-sponsored non-governmental organizations and it would be difficult for the Caucasus nation to fend off pretensions of its assertive neighbor, the head of a Russian NGO says.

Temur Kobalia, an ethnic Georgian born in Gali who has lived decades in Russia, is co-founder of Georgian-Russian Forum, a non-governmental organization (NGO) which aims at strengthening ties between Russian and Georgian civic actors and is supported by Western donors. He visited DF Watch to talk about a range of issues, like the Kremlin’s ‘soft power’ in Georgia and pressure on foreign foundations, and his own organization, in Russia.

“Georgian-Russian Forum is the only place where participants remain independent,” he tells DFWatch, adding that the forum, which is supported by Western donors, has had dozens of members from both sides.

The situation of independent NGOs is quite tough in Russia today, as if the government doesn’t like organizations confronting the policies of President Putin, they are either fined or compelled to cease their activities altogether, or leave the country, Kobalia claims.

He believes the criticism against Georgian-Russian Forum has been intensified since it overtly declared its support for Georgia’s European ambitions and the country’s signing of an association agreement with the EU last summer.

“Our organization aims to improve relations between Georgian and Russian people but also supports Georgia’s European choice, which makes many people, especially in Russia, hostile towards the forum,” Kobalia said.

According to him, the forum is seen as a competitor to Kremlin-protégé organizations. Despite all of these third forum was held in July of 2015 with the participation of more than 100 organizations.

The third forum was dedicated to ecology. Among the participants from Russia there were eight organizations which Russia considers ‘agents’ even though their activities are to protect human rights and democracy.

Kobalia believes there are several Russian so-called Gongo organizations active in Georgia, implying those NGOs and think tanks, which are funded by the Russian state and, thus, promote its interests and facilitate its propaganda.

“Although Georgia’s European choice is widely supported by the people, during the last three years we’ve been witnessing multiplication of those groups, which attempt to assure Georgians to revise their attitudes towards European integration in exchange of embracing Russian-led Eurasian Union,”  Kobalia said.

According to him, unlike its activities in Ukraine, Russia has tried to promote and publicize the Eurasian Union through soft power, i.e. different groups lavishly funded by Moscow. Kobalia talked about the list of such organization.

“First is Russian Institute of Strategic Researches known as RISI, which is a large think-tank, established by the former president, and current prime minister, Dmitry Medvedev.

“Major goal of RISI is to provide information to the Presidential Administration, the Federation Council and the State Duma, the Security Council of the Government, ministries and agencies,” Kobalia said, adding that it provides expert appraisals, recommendations, prepares information and analytical materials for the Russian authorities.

Among other organizations he names Alexander Gorchakov Public Diplomacy Fund, “which arguably aims at spreading positive image of the Russian Federation in society, and promote Eurasian Union as a better option for Georgia”, and the Lev Gumilyov Center, which holds about 30 meetings annually in different regions of to publicize Eurasian Union instead of the EU.

If we look at several publications of those organizations, as well as their Georgian partners, published on their websites to illustrate that in fact they aim at spreading incorrect or biased news and information about Georgia, thus promoting Russian propaganda goals.

As for the Georgian-Russian forum, it managed to hold three annual meetings so far attended by about 110-120 organizations from both sides each time. Meetings were supported by different foreign foundations.

Temur Kobalia, who was born in Gali, Abkhazia, Georgia’s breakaway region, and who has lived in Russia form he was six, says members of Georgian-Russian Forum are under constant pressure in Russia, even though the organization is registered in Georgia, not in Russia.

The situation regarding NGOs in Russia has been aggravated since early July when apart of “foreign agents” list for domestic NGOs, Federation Council, the upper house of the Russian parliament, worked out a “Patriotic Stop-List” for undesirable international, mostly European and the US, organizations who, the Council believes, pose a threat to the state.

Federation Council submit the list to the Prosecutor General’s Office, the Ministry of Foreign Affairs and  the Ministry of Justice in order to investigate their activities and probably designate as “undesired”, thus ultimately banning them in Russia. Most of organizations included in the list support democratic groups, scientific research and humanitarian activities in the country.

According to Kobalia, recently authorities, the Prosecutor’s Office and Ministry of Justice, recognized the NED as the undesirable organization, the first as such a group. However, authorities carry on “examining” others in the Stop-list, especially Soros and MacArthur foundations.

“Now, only NED is the first one into the list,” Kobalia said. “If ‘an undesired organization’ poses a threat to statehood of Russia, then such organizations might be banned of having representation in the country; in such a case if you have any kind of communication with this organization, even respond to its email, you can be fined by great amount of money first time, the greater amount for the second time and a criminal persecution and incarceration for the third time.”