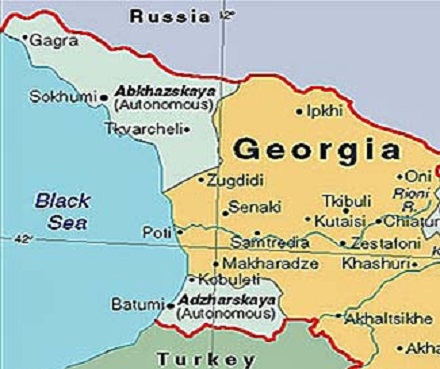 An old map showing the borders before the breakup of the Soviet union. Since then there have been two wars. In 2008 Russia enforced the old Soviet border around Abkhazia.

Neutral identity papers is a form of documentation used in Georgia for persons who are from the breakaway parts. Last summer Georgia’s parliament introduced a neutral passport that may be offered for people who live in Abkhazia.

Today, most inhabitants in the region hold an Abkhazian passport, but it is of little use when travelling internationally, because it is only valid in Russia, Venezuela, Nicaragua and Nauru. Many also hold a Russian passport.

The issue of passports and citizenship is a source of friction also for ordinary people. Abkhaz authorities have promoted, or by some accounts forced, the use of the Abkhaz passport, and since they do not allow double citizenship other than Abkhaz-Russian, many Georgian citizens, particularly in the Gali region, report that they have been forced to renounce their Georgian citizenship as a consequence of this effort, although this is denied by Abkhaz authorities.

Gali is a town in the south of Abkhazia with predominantly ethinic Georgian population.

Now the leader of the region, Alexander Ankvab, is threatening to throw out any international organizations that support the introduction of the Georgian neutral passport.

“International organizations that suggest the so-called neutral passports, will leave Abkhazia,” Russian media quotes his as saying during a meeting with the leadership of the foreign ministry in Sukhumi.