Abkhazian exhibition in Montenegro shut down on Georgia’s request

Abkhazian exhibition in Montenegro shut down on Georgia’s request 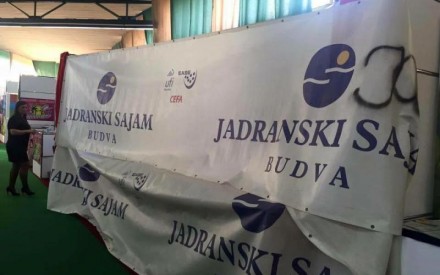 TBILISI, DFWatch–The Ministry of Foreign Affairs of Georgia filed an official complaint with the authorities of Montenegro, as a result of which Montenegrin police shut down an Abkhazian tourism exposition.

The Abkhazian exposition was a part of an international tourism fair called the International Tourism Exchange, Tourism Fair, Equipment for Hotels and Catering (METUBES 2016) in the seaside town of Budva in Montenegro.

According to the president of Abkhazia’s Chamber of Commerce Gennadi Gagulia, Montenegrin police covered the exposition with tarp following Abkhazia’s refusal to remove it from the fair.

‘By the end of the day, police surrounded our pavilion. The government of Montenegro instructed them to immediately close our exposition. They said that Montenegro’s MFA received a complaint from the MFA of Georgia. After we categorically refused to comply, they realised that they couldn’t remove us by force, so they brought a tarp and covered the exposition with it from all sides’, Mr Gagulia told Sputnik Abkhazia.

Georgia habitually tries to prevent Abkhazian participation in international political, cultural, and sport events, where it is presented as an independent state.

Georgia considers Abkhazia a territory occupied by Russia and doesn’t recognise its de facto independence, which has only been acknowledged by four UN member states. All other states consider Abkhazia a de jure part of Georgia.