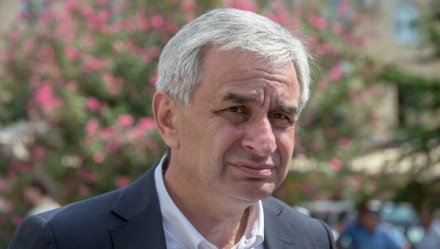 TBILISI, DFWatch–The de facto president of Abkhazia Raul Hajymba (Khadzhimba) told Russian media that the murderer of Georgian IDP Giga Otkhozoria won’t be handed over to the Georgian side.

“According our legislation and constitution we can’t hand over our citizens under jurisdiction of another state,” Hajymba said.

He declared, however, that he will be punished if the court finds him guilty of the crime.

“A criminal case is being investigated. He was suspended from work. If found guilty, he will incure the appropriate penalty. We have the appropriate law that will enable us to do this,” Hajymba said.

Giga Otkhozoria, a Georgian internal refugee, was fatally shot by an Abkhaz border officer on May 19 while on Georgian-controlled territory at the Khurcha-Nabakevi checkpoint on the border with Abkhazia, one of Georgia’s two breakaway regions. The local prosecutor’s office opened an investigation into the murder, but de facto Abkhazian authorities have reportedly so far failed to detain the suspect.