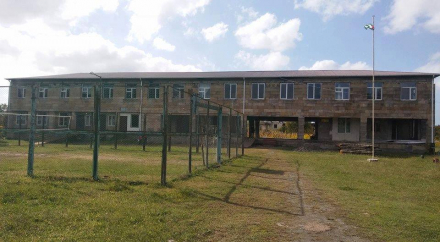 A part Georgian school in the village of Sida. (DFWatch.)

Sokhumi suspects that the schools in this southern district with a predominantly ethnic Georgian population are violating a relatively recent policy to only allow Russian as the instructional language  up to 7th grade, and instead teaching in Georgian.

“We had open door days a few days ago. Up to 50 guests came to check [teaching process] and attended lessons. Can you imagine 12 such ‘guests’ sitting at the class with only 6 students? Similar open days were held every year, but they’d never come with such a huge delegation. In addition, unexpected visits to schools have become systematic. Any time the controller from the Gali administration can open the door [to the classroom],” a teacher at one of the Georgian schools in Gali told us.

Most teachers DFWatch met with suspect the reason is to ultimately root out teaching in Georgian.

“As you know, schools keep on teaching in Georgian, hence I think such unexpected visits are intended to root it out,” the teacher said.

In addition, last week the breakaway authorities held exams for the Russian teachers at the Georgian schools.

“The examination material was sent from Krasnodar. It included 30 items. Up to 50 teachers were examined, eight didn’t pass,” she said.

Georgian teachers have already undergone special training in Gali for several years, and after the end of the course they have to pass an exam.

Currently 30 schools are open in the Gali district, ten of which are part Georgian. From September 1, Georgian was replaced by Russian as the instructional language in all classes from 1st to 7th grade. Although senior classes still teach in Georgian, this will be phased out. In a few years, all schools in Gali will therefore teach in Russian.