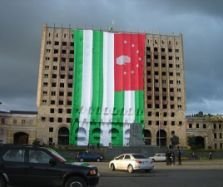 two days ago as he was presenting his report about the government’s first two years. He said that the claim of independence on the territory of Georgia is an ‘unimplemented plan.’ He said that neither Abkhazia nor South Ossetia will be able to create independent states in Georgia.

“This is not going to happen, my friends,” he said adding that this is a utopian plan which will never be accepted by current or future generations. “You can’t be happy without us and we won’t be happy without you. We really want to restore trust among us.”

He said Georgia doesn’t want to develop without the two breakaway regions.

“You remain autonomous republic and we offer you to have autonomy, but within the frames of a strong and united Georgia, and let’s live peacefully together.”

The de facto Foreign Ministry of Abkhazia responded the next day by saying that by his proposal the Georgian PM proves the ‘ignorance of reality in the region’ once again and his ‘inability to perceive this reality.’

The de facto ministry accuses Georgia of attempting to use ‘sly tactics’ aimed at Georgia’s western partners for whom ‘any declaration of official Tbilisi immediately is interpreted as the biblical commandments.’

The statement says Abkhazia firmly stands on the way of developing independently and will continue doing so without Georgia’s ‘friendly and brotherly proposals.’