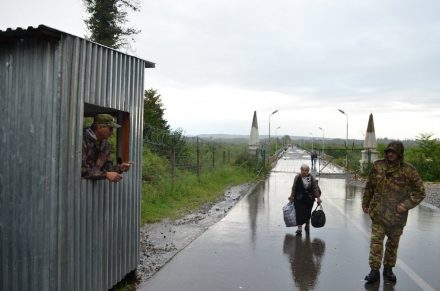 GALI, DFWatch–The breakaway region Abkhazia demands an official document issued by the Georgian Ministry of Justice proving that someone has renounced their Georgian citizenship in order to grant them an Abkhazian passport, Gali residents told DFWatch.

Previously, a person only had to formally state that he or she had renounced their Georgian citizenship, while in reality they hadn’t.

Ethnic Georgians living in breakaway Abkhazia, mainly in Gali district, have to pay about 4,500 laris (USD 1,790) in total for an Abkhazian passport. This includes the official fees as well as the bribes that are necessary to obtain the documentation and pass through the procedures in the corruption-ridden “republic”.

The ethnic Georgians here are deprived of many civil rights and for many of them, having an Abkhazian passport means, at least to some degree, having the opportunity to move freely in and out the breakaway territory. This is especially true for those who aim to find work in Russia.

DFWatch contacted the Ministry of Justice of Georgia to ask for statistics of how many Gali residents have renounced their Georgian citizenship, but the ministry did not provide such figures. Georgia, like most countries, does not recognize any documents issued by Abkhazia’s de facto authorities.

Locals say that the process is not massive, but some precedents have already been set.

“A young couple lives in one of the villages in the lower zone of Gali. The husband worked in Russia and his wife lives here, in the village. Now they have decided to live together and because they haven’t been able to find a decent job in Georgian controlled territory, they decided to relocate to Russia. To do this it is necessary to have an Abkhazian passport in order to get a foreign passport, which is necessary to get into of Russia, so the couple opted for this way,” a Gali local said.

After the 2008 Russo-Georgian war, Russia took control of the borders between Georgia proper and territories controlled by Abkhazian and South Ossetian separatists. In the Gali area, this meant tightened control and opening of border crossing points.