Abkhazia appeals to UNESCO for help to save cultural monuments

Abkhazia appeals to UNESCO for help to save cultural monuments 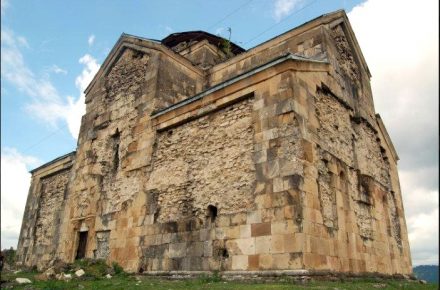 In a video published a few days ago, Georgia is accused of having a “destructive” policy when it comes to taking care of the cultural heritage in the province, which went through a bloody war in the early 1990s that ended in a breakaway regime increasingly propped up by Russia.

Shaped as an appeal to UNESCO from a charity called “Abkhazia’s Goodwill Ambassadors”, the video features scenic images of old churches with commentary that mixes in references to the brutal 1992-1993 war which displaced over two hundred thousand people.

The de facto Abkhazian deputy minister of foreign affairs appears, saying the unique frescoes and architectural monuments were mercilessly bombed and destroyed by the Georgian army during that war.

In its appeal to the UN agency to send experts who could help restore sites like Bedia monastery (pictured), the charity noted that Abkhazia is the ‘cradle of Christianity in the Caucasus, and its temples, due to the destructive policies of Georgia, have become desolate’.

Abkhaz and Russian media outlets released the video, which was also uploaded to Youtube.

In its response, Tbilisi rejected accusations that the ‘catastrophic condition’ of the historic buildings is its fault, stating that the de facto government in Sokhumi has been repeatedly approached by them to help in the restoration of monuments, but the offers have always been declined.

“This statement by the Abkhazians is strange and unreal, because the Georgian side has not been able to enter the occupied territory for 24 years. From whom do the monuments need to be protected?” asked Nikoloz Antidze, Director General of the National Agency for Cultural Heritage Preservation.

Tbilisi offered to let UNESCO into Abkhazia and organize a joint monitoring of the architectural monuments there, provided that Georgian specialists are involved in the process, the Ministry of Culture and Monument Protection stated, adding that Georgia will also cover all the expenses.

But the UNESCO specialists will not work in the conflict zone without Georgia’s consent, Antidze told DFWatch.

Georgia has repeatedly addressed Abkhazians to conduct monitoring under the aegis of international organizations and with participation of Georgian specialists, but every offer has been declined. Therefore, this appeal by the Abkhazians will not bring about anything, he added.

When UNESCO specialists came to Sokhumi twenty years ago, they were unashamedly deceived, as Antidze recalls.

“In 1997, when there was information spread that someone attempted to erase Georgian Asomtavruli inscriptions on the Tamar Bridge and the UNESCO experts arrived in Abkhazia, Georgian experts were not allowed to enter and the [Abkhaz side] showed UNESCO experts a different bridge,” Antidze said in an interview with DFWatch.

Official Tbilisi claims that since 2010, the destruction of cultural heritage monuments in the region has intensified and suspects that the Abkhaz side is damaging the unique monuments in efforts to erase traces of Georgian culture. This particularly concerns medieval Georgian inscriptions on bas-reliefs and frescos that adorn the temples.