A small crowd in Tbilisi rallied to support Yerevan protesters

A small crowd in Tbilisi rallied to support Yerevan protesters 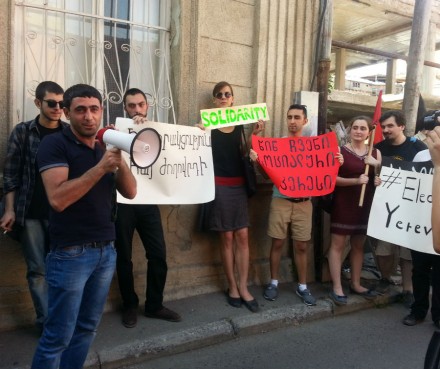 A rally of solidarity at Armenian Embassy in Tbilisi (DFWatch)

Tbilisi, DFWatch — A crowd of a few dozen gathered in front of the Armenian embassy in Tbilisi on Wednesday afternoon to show their solidarity with protesters in Yerevan.

One of the rally organizers Rezo Karanadze from the Self-Organized Student Network, a grass-root leftists organization, told that the idea was to express solidarity with Armenian protesters who were suppressed by the police yesterday.

“We believe that Armenian public has legitimate reason to protest against artificially raised electricity prices. First of all, Armenia has a nuclear power plant. Also, it is weird that electricity prices in Armenia are the highest in the post-soviet space,” Karanadze said.

Another reason for the rally was to show that people care not only about liberal and human rights issues, but about socio-economic causes as well, he added.

“If nationalism divides us, our class struggle unites us. Therefore we stand here not as Armenians and Georgians, but as socialists, as one class, which is being exploited by the political and economic elites,” Karanadze said.

He did not hide his disappointment with the turnout.

“As usual, people are more active in social media. Hundreds of people said they were coming, but a lot less showed up,” he said.

Among the protesters were few Armenians from Yerevan as well. One of them, Anna Davtyan, told DFWatch she and her friends came to Georgia on a business trip yesterday. She wished to be in Yerevan at the moment with her friends, but came to the rally in Tbilisi instead.

”We don’t understand what is written in Georgian, but it is nice to see solidarity. It is very empowering to have good, understanding neighbors,” Davtyan said. .

The current wave of protests in Yerevan started when the governmental Public Services Regulatory Commission decided to allow the rise in electricity prices.

A peaceful protest started on Monday. By Tuesday, demonstrations in the streets of Yerevan attracted thousands of Armenians and the police dispersed them with water canons, arresting over 200 activists and journalists.

Armenia’s power grind is controlled by the Armenian Electricity Network. It is a subsidiary of the Russian company Inter RAO UES, whose main stakeholders include Russian state-controlled entities.

Public Services Regulatory Commision allowed to raise electricity price more than 16 % from August 1. According to the Armenian Electricity Network, the move was necessary due to the depreciation of the Armenian dram against the US dollar. But protesters insist such increase would be too much for regular people to afford.