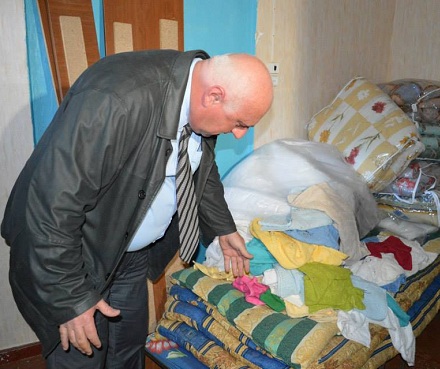 TBILISI, DFWatch–The Refugee Ministry says there has been discovered a sixth depot where equipment, home appliances and various supplies for refugees has been kept since 2008.

The humanitarian goods were this time discovered in Bolnisi. The goods should have been distributed to internally displaced people from the Russia-Georgia war in August 2008, but this didn’t happen.

After itemizing the depot, the municipality will hand over its contents to the Refugee Ministry, which will distribute it as humanitarian goods to IDPs.

“For unknown reasons, the goods were not distributed to IDPs, while these goods were vital for each displaced person then,” the statement by the ministry reads.

Mamuka Tsotniashvili, Deputy Refugee Minister, on Monday told journalists that this is the sixth storage place for humanitarian goods the new government has discovered.

“I desire and I hope that we will find out why these acts of vandalism took place and appropriate government bodies will require answers for each of these six storage places,” he said.