A catalogue of brutality

A catalogue of brutality 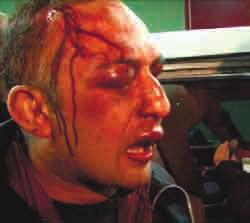 TBILISI, DFWatch – In spite of early reports of three dead, five people actually died when police raided and dispersed a peaceful anti-government protest in Tbilisi on May 26, 2011. The horrors visited upon those who were there is the topic of a lengthy report published Friday by the Georgian Young Lawyer’s Association (GYLA).

GYLA’s report reviews excessive use of force by police, interruption of journalistic work, five deaths, arrests and other events that took place on and around May 26, including the period right before the rally, when there were mass arrests all over the country.

The background for police moving in was that demonstrators were blocking the road in front of parliament, where a military parade was planned the next day to mark 20 years of independence.

Five deaths are reviewed in detail, despite the fact that the working group had many difficulties obtaining the evidence in criminal law cases and testimonies of witnesses and suspects.

Four of the victims were participants in the rally and one of them a police officer. The first case which is reviewed in the report is about Nodar Tskhadadze and police officer Vladimer Masurashvili. According to the interior ministry, both died when a convoy of cars belonging to rally organizers was passing the street and they two fell under the wheels.

The report says that the statements made by the Interior Ministry regarding this case are controversial. The suspects named in the first and second statements are different people. The ministry sent out two videos showing footage of the vehicles, showing what is claimed to be the immediate death of the two. But a closer examination raises doubts about whether this account is correct. The body of Nodar Tskhadadze was found 100 meters away from the place where the ministry claims the incident had happened.

The analysis shows that material and statements from the interior ministry do not show the death of Nodar Tskhadadze at all.

“Significant questions and doubts arise about Nodar Tskhadadze’s case in terms of the factual circumstances established by the investigation, including the irrelevance of the released video record portraying the incident, analyses of the scene of action, and the problems providing Nodar Tskhadadze with timely medical aid,” the report says.

Another incident reviewed in the report is the death of Nika Kvintradze and Suliko Asatiani, which is also very suspicious and raises many questions. In all cases GYLA argues that the investigations are not objective because instead of the prosecutor’s office, they were conducted by the interior ministry, which itself was responsible for dispersing the rally, and despite the high public interest it didn’t publish any of the evidence connected with the cases.

During the dispersal of the peaceful rally protest the police ‘violently beat’ Temur Kapanadze. As a result of serious injuries and illness he died eight days after May 26. The tear gas capsule hit his chest region and rendered him unconscious.

“Kapanadze’s death presumably is a result of excessive force used against him by police. As it is visible from the presented case, police violated the rule of prudence, necessary for the use of gas capsule, which should have ban its application against a particular person or persons. Gas weapons have possibility of discriminatory application.”

All the investigations are currently closed.

A special chapter of the report is dedicated to the media. It says that 29 journalists were affected by different incidents, despite the fact that the police could differentiate journalists from protesters.

There are nine cases of police taking and destroying equipment; also deleting the material of some media representatives.

The methods used by the police that night during the dispersal are violent and illegal, according to the report. They used force despite the fact that the resistance of protesters had already been suppressed and even when people were under the control of police, thrown on the ground with their hands tied.

“Law enforcement beat them with rubber truncheons and verbally abused them. The most vivid example of excessive use of force is the beating with truncheons of a juvenile by several Special Forces officers. Special Forces Unit further fired rubber arms from short distances, aiming directly at the heads and faces of protesters; as a result, one of the participants suffered loss of eyesight.”

The report analyses the use of each special means used against people by the police in parallel with the international standards and regulations of how these means should be used. A number of situations are described in detail, telling of humiliation and violations against protesters and others who just happened to be there that night.

There were a number of incidents of more than ten policemen beating one person who did not put up resistance. A special chapter describes the so-called ‘corridor of shame’, which the police used several times.

“The corridor of shame entails the following: law enforcement officers are divided into two groups, facing each other, thus creating a so-called live corridor. Demonstrators walk between these two groups, while police beat them with fists and truncheons.”

Nearly a hundred people were arrested during the night of May 26. There were instances of tortures and violence against people who had been arrested and detained. Conditions in places of detention are also described: the lack of food, space and hygiene. It’s also important that lawyers were prevented from contacting the detainees.

“I was lying on the ground, with my hands cuffed. I was kicked, beaten by hands, a white cane. The only place where they did not hit me was my face. I was taken to a smaller room in the morning, to the 7th floor I presume, where I was beaten by 4-5 policemen continuously for 3-4 minutes. One of them beat me with rubber gloves in my ears.” The report quotes one of the detained, Murman Dumbadze. “One of the policemen dragged me to the bathroom and washed the blood off of my face. Afterwards, at around 10:30, I was taken to court. Policemen in the bus continued beating me. My head, nose, ribs, limbs, and eye were injured.”

The report was presented at the Holiday Inn in front of representatives of foreign and local non-governmental organizations, media and a representative of the Georgian Interior Ministry. He thanked GYLA for conducting these analyses, but remarked that at the first sight the report seems one-sided. He asked whether the police did at least anything that conformed with international standards and legislation and does the report reflects the violence conducted by demonstrators?

Tamar Chugoshvili, the head of GYLA, answered that the report puts its emphasis on violations, because GYLA is a human rights organization and as for the violence done by participants in the demonstration, she says that it’s reflected in the report.

There is a special chapter about protesters used plastic sticks using for self-defense, and one incident when a car belonging to the Department of Constitutional Security was hit with sticks in an attempt to free detainees who were sitting inside it. There are described several incidents of violence by a group called Oath and Fealty, that was armed with plastic sticks.

“May 26 was not a dispersal of a rally. It was a punishment,” Nona Gaprindashvili, the member of Public Assembly remarked at Friday’s meeting.

“They held a massacre. They were beating handcuffed people,” she says, reminding of the facts of violence against people and also that police weren’t letting people from the regions come to the capital for the demonstration and the arrests in the days before May 26.

Gaprindashvili also says that the trials in the cases are still ongoing in the courts and that innocent people are being sent to jails for several years based on false witness testimonies.

“May 26 is a black stain on our history, and this day won’t be forgotten.”