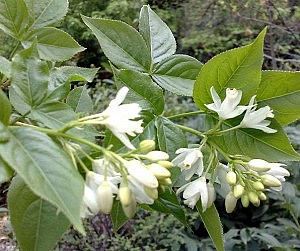 Jonjoli, or bladdernut, is a shrub used for cooking in Georgia

Jonjoli is a plant which grows in the wild in Georgia and is used for cooking. Twelve people went from village Korbouli, Sachkhere for jonjoli picking, when Russians detained nine of them and took to the detention facility in Tskhinvali.

Jonjoli, or bladdernut, is a shrub used for cooking in Georgia. It grows in the wild in many areas in Caucasus, including places adjacent to the disputed border line and can be sold in the markets.

Usually Russian troops deployed in Georgia’s breakaway region of South Ossetia serve as border guards and hand detainees over to the Tskhinvali authorities. The latter impose fines to the detainees for “illegally crossing the state border” totaling 2,000 Russian rubles (USD 30) and usually release after several days.