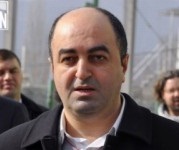 TBILISI, DFWatch–About 800 prisoners are on hunger strike in a prison in Geguti in western Georgia, Ombudsman Ucha Nanuashvili says.

Nanuashvili said after meeting with prisoners on Friday that about 800 are on hunger strike demanding that the Prosecutor’s Office investigates three cases of prison administration using pressure against prisoners.

Nanuashvili said he was told by some of the prisoners that they have physical injuries and he recommends having the incidents investigated.

Prisoners also demand to lift restrictions on sending parcels into the prison and end the checking of relatives who come for long-term visits to them in jail. Prisoners claim their relatives are humiliated during the checking.

The ombudsman also said prisoners want to have access to normal medical treatment and want to get increased term of walking.

Nanuashvili will ask law enforcement bodies to take measures and study each of the prisoners’ statements.