7 dead in Tbilisi flood, as tigers, lions and bears escape from zoo

7 dead in Tbilisi flood, as tigers, lions and bears escape from zoo 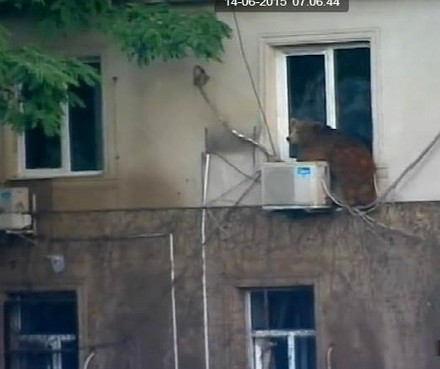 A bear sitting on a window sill in Tbilisi on Sunday. (Rustavi 2.)

TBILISI, DFWatch–The death toll after last night’s flood in Tbilisi has risen to seven, as police urge people to stay off the streets and beware of tigers, lions and bears that escaped from a zoo.

At least seven died and an unidentified number are still missing after a heavy rain triggered flooding of Vere river in the center of Tbilisi.

“Rescue workers, the patrol police, units of the Ministry of Defense and the City Hall worked through night to rescue people,” Narmania said. “Most of those who had been deemed lost, were eventually found.”

Heroes’ Square and a new road constructed several years ago along Vere river and small private houses nearby were hit most.

Tbilisi Zoo, which is located at the junction of Heroes’ Square and Vere river, was almost entirely flooded, causing casualties among its personnel and animals. Many animals escaped their cages, including up to 30 larger predators – reportedly 6 lions, 6 tigers, a pack of wolves of about 13 and 7 bears – as well as a hippo and other animals.

Three zoo workers were found dead in the zoo, including Guliko Chitadze, who was attacked by an Amur tiger 10 days ago and lost one arm.

The police sealed Heroes’ Square and surrounding places in order to keep the predators away from people.

Earlier in the morning, the Ministry of Internal Affairs called on inhabitants to abstain from walking in Tbilisi streets due to the threat of being attacked by the predators who escaped the Zoo.

The MIA is cooperating closely with zoo staff to catch and return all animals back to their cages. According to the statement issued by the ministry Sunday morning.

“So far we managed to tranquillize some of the animals and to put down some others,” the statement says. ”

The MIA asks population to call 112 emergency center immediately upon noticing animals on the streets.