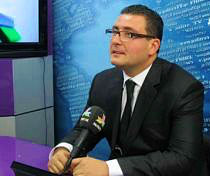 TBILISI, DFWatch–57 percent of foreigners who crossed the border into Georgia in first quarter of 2013 were tourists, according to the first result of a report conducted by the Georgian National Tourism Administration.

Giorgi Sigua, head of the administration, said while presenting the report at Radisson Blu Iveria Hotel that the remaining share of visitors are people who didn’t stay in the country for more than a day.

The presentation was attended by representatives of tour operators, hotels, restaurants and air companies.

Sigua noted that Georgia still doesn’t have a strategy for tourism, but there are already plans to implement certain structural changes, and to set up regional management organizations, while lawyers are working on preparing a law on tourism.

During the presentation, the tourism administration presented the results of a survey on local tourism conducted from January to March 2013.

According to the results, 57 percent of visitors had tourism as a goal, while the other 43 percent stayed no longer than one day. 38 percent came to spend their holiday here, while 20 percent were visiting friends and relatives. 19 percent were crossing through Georgia as a transit country.

The most popular destination apart from the capital Tbilisi was Batumi, a coastal resort on the Black Sea.

The Ministry of Internal Affairs groups data about people crossing the border into three categories: A tourist is a foreigner who crosses the state border and remains in the country no less than 24 hours and no more than one year. A transit visit is a visit by a foreigner who crosses the border and after no longer than 24 hours goes on to a third country. The third category is ‘the rest’, all other types of visits.