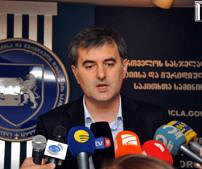 TBILISI, DFWatch–45 inmates are on hunger strike in the women’s prison in Rustavi, demanding to bring back the recently fired director of the facility.

Later today, 80 other prisoners in a sign of solidarity refused to eat bread. They demand that Salome Janelidze and her deputy Nino Maisuradze are restored to their positions.

The prisoners also demand a meeting with Eka Beselia, chair of the human rights committee in parliament.

Relatives who arrived at the prison today with food for prisoners were rejected and had their parcels returned, according to Interpressnews.

Prison Minister Sozar Subari today told journalists that it is the prerogative of the ministry to fire or appoint directors of prisons, and that a hunger strike cannot affect this decision.

He said every decision to hire or dismiss an employee might be followed by dissatisfaction or resistance, and some may protest a firing, while others will be opposed to an appointment.

“This is understandable and an ordinary situation for a locked system,” he said.

Subari did not specify the reason for firing Salome Janelidze, the former director of Prison No 5, but said she has not been appointed to another position.

Janelidze was appointed in April, after having worked at Gldani prison in Tbilisi. Her appointment followed a scandal about drugs being smuggled into Rustavi women’s prison.