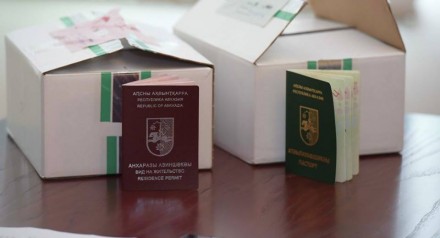 Tbilisi, DFWatch – New legislation doesn’t solve the problems of Abkhazia’s Georgians, who still find themselves in limbo of no right to vote and own property.

‘Issuance of new passports for inhabitants of Abkhazia will begin in March and price of the new document will be 420 roubles’, prime minister of Abkhazia Shamil Adzynba announced.

The authorities in Sukhumi are planning to replace existing passports with new ones in order to increase the levels of protection of the documents.

‘The internal passports of the citizen of Abkhazia which currently exist were the first documents we issued. We consider them our pride, but they weren’t printed in Russia and their quality turned out to be poor’, Mr Adzynba told Apsnypress back in February 2015, when the process was first announced.

‘Printing took approximately 40 million roubles, the equipment — about 24 million roubles, and the electronic system cost about 16 million roubles. The amount is certainly impressive, but it is necessary to ensure our state security’, prime minister told Sputnik Apsny.

Passports will be issued in thirteen specially created service points throughout the republic. The authorities are planning to conclude the process of issuing new passports towards the end of the year.

The passportisation process coincides with the plan to issue residence permits to ethnic Georgians inhabiting the east of Abkhazia.

Georgians saw their Abkhazian citizenship cancelled on the eve of Abkhazia’s presidential elections in August 2014, which denied them the right to vote, own property, set up business, attend university, and to access healthcare.

Abkhazian authorities announced plans to issue residence permits instead, which sent further shockwaves in the community, as resident permits are considered documents which are granted to foreigners. The authorities argue, however, that many ethnic Georgians hold Georgian passports, which makes them foreign citizens. They justify their application of collective responsibility by security reasons, as they view Georgia being formally at war with Abkhazia.

Ekho Kavkaza (‘Caucasus Echo’) reported that an idea for postponing elections in Gal (Gali) due to lack of regulations regarding issuance of residence permits was discussed in the Parliament. Three members of the parliament harshly criticised the idea.

Aslan Kobakhia called the idea ‘a hideous attitude and rudeness on behalf of the government’. Almas Jopua accused the government of ‘failing the passportisation process and failing to keep the deadline for elections to local self-governments’ and asked for a vote of no confidence to the prime minister. Akhra Bzhania said he was tempted to vote against the notion in order to ‘punish the people, who failed to do their work’.

According to the newly adopted law On the Legal Status of Foreign Citizens in the Republic of Abkhazia, persons holding the residence permit have no right to vote or to own property, which doesn’t bring much change in the situation of Abkhazia’s Georgian community.

Ekho Kavkaza quotes Mr Adzynba saying: ‘All residents should have not only a formal document with name, last name, and a photograph. Such a document should also give certain rights to a person. We think that a residence permit doesn’t allow a person to use their political rights, but it lets them enjoy all other rights’.

When asked whether these rights are specified in the legislation, Mr Adzynba said: ‘No, but there are other regulations, mechanisms, we understand the issue perfectly. This issue lies not only in the competence of the government; it should also be discussed with the Parliament. It will all be done soon, I assure you!’