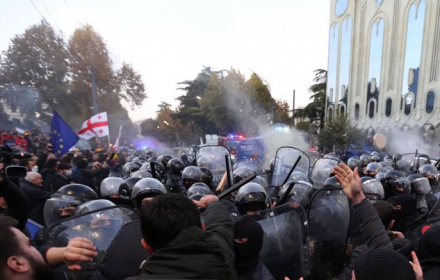 TBILISI, DFWatch–37 people were detained in Tbilisi on Monday after riot police dispersed a group of opposition activists blocking the parliament to protest its failure to amend the electoral law.

The police and protesters clashed at the entrance of parliament after the latter locked all of its entrances and declared they wouldn’t let MPs and staff inside until the government fulfills their demands.

The riot police also removed tents put up by protesters next to the building.

The opposition, however, soon resumed the rally in front of parliament on Rustaveli Avenue, and vowed not to give up until their demands are met by the government.

Rallies are taking place in Tbilisi and several other cities and are backed by almost the entire opposition political spectrum. This is the sixth day of protests since parliament broke a promise given by GD leader Bidzina Ivanishvili in June to change the Constitution in order to hold the next general elections by a fully proportional system.

The failure to pass the amendment triggered a mass outcry by all opposition parties and a significant part of the public. They feel being betrayed by the government and demand its immediate resignation and to hold a snap election.

The ruling party, Georgian Dream, fears switching to an entire proportional system, feeling that it might undermine their grip on power, the opposition thinks.

The GD, on the other hand, claims that it had done its best to change the Constitution but was unable to convince some if its members of parliament to support the bill.

Under the current mixed system, general elections are held by a combination of proportional, or party lists, and the majoritarian system of single-mandate districts. The opposition and most political commentators claim the current system gives a clear advantage to GD and will enable it to win the next election, scheduled for fall of 2020, ushering in an era of authoritarianism in the country.