3500 miners on strike in Georgia

3500 miners on strike in Georgia 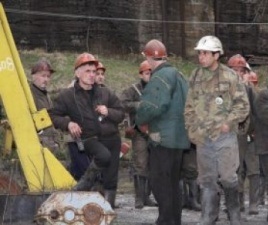 TBILISI, DFWatch — Thousands of miners are on strike in western Georgia, demanding to improve work conditions and have a normal salary.

About 3500 workers from six mines in Chiatura, which is rich in manganese, went on strike on Monday. All the mines are closed down right now due to the protest.

There have been several attempts at negotiations with Georgian Manganese, the company which owns the mines in Chiatura, to agree on certain issues with the workers, but so far unsuccessful.

The miners’ primary demands are to increase salaries, improve work conditions and to feed their families.

Sunday night, the first group of workers from Shukruti mine laid down their work. In the morning other miners joined in.

The workers say they won’t stop their protest until their demands are met. They say the administration offered to increase awards by ten percent, but refuse to raise their salaries; an offer they consider humiliating.

Trade Union representatives report that miners have difficult conditions. There is no ventilation, and workers have to stand in water.

Last week, workers from Tkibuli coal mine were also on strike requesting to be paid salaries for the last three months and abolish recent decision of Saknakhsiri LTD which might reduce salaries for miners. That protest ended with a promise that salaries won’t be reduced and money for past three months will be disbursed in the near future.