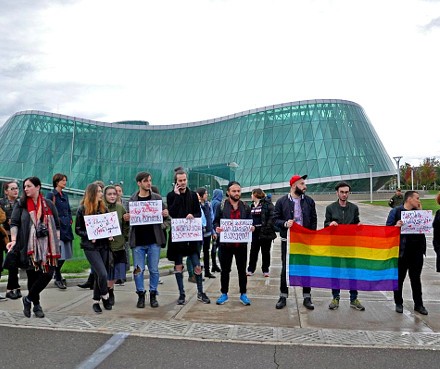 Reacting to the recent attack, dozens of people protested outside the MIA building Sunday evening, to say no to violence against transgender people. (DFWatch.)

TBILISI, DFWatch–Police in Georgia arrested a man on Sunday who is suspected of having attacked a transgender woman two days before.

The suspect is accused of attempted murder. According to the Ministry of Internal Affairs (MIA), the 31-year-old was on probation after a prior conviction.

“The investigation established that on October 14, the accused gravely injured a person born in 1982 with a knife and blunt object in Ortachala and ran away,” the statement reads.

The detainee admitted guilt during police questioning. He was arrested in the town Rustavi. Police also found a knife.

The transgender woman remains in hospital in a serious condition. The attacker cut her throat.

The ombudsman Sunday called for the Prosecutor’s Office to investigate the case as a hate crime. The ombudsman drew attention to how investigations into discrimination or hate crimes in many cases are launched on an incorrect article in the law.

“Considering homophobic and transphobic attitudes in public there is a danger that these kinds of crimes might be repeated when law enforcement bodies do not pay attention to motives of discrimination,” the ombudsman writes in a statement.

Dozens of people gathered outside the MIA building Sunday evening to protest violence against transgender people and the recent attack.

The main message of the protest was that everyone has a right to live.  The participants also demand that investigators find out whether the crime was based on hate or of there was some other motive. If the motive was hate towards different sexual orientation, this has to be punished.

“When this kind of crime is not punished we get the syndrome of violent people not being punished; furthermore it opens up room for them to continue harassing LGBT people,” Levan Berianidze, from LGBT Georgia told journalists.

“No-one wants to admit that these murders are motivated by hatred,” Tamar Kordzaia, member of the Republican Party said.

According to Women’s Initiatives’ Support Group, there have been registered at least 20 cases of attacks against transgender and gender non-conforming people in 2016.

The rally participants also took a moment to remember Sabi Beriani, a transgender woman who was murdered in November 2015. The person accused of her murder was acquitted.