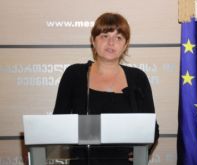 TBILISI, DFWatch–More than 26,000 candidates have been accepted as students this year, according to the head of Georgia’s National Exam Center.

Maia Miminoshvili told journalists that about 35,500 entrants took their test exams this year, but 9,000 failed to pass.

There were 45,000 vacant places at the universities, according to her, and the results this year seemed to be better than last year, because last year 12,000 entrants weren’t able to become students.

This year, 215 entrants did well enough in the tests to become students, but weren’t able to be accepted at their desired faculty. Last year there were 698 such entrants.

More than 6,000 students will get partial or full scholarship from the government.

“If our goal is that every entrant becomes a student, I think we are achieving this goal, as the number of entrants who are able to pass the minimal competency increases every year,” Interpressnews quotes her saying.

Miminoshvili says this year’s results are better than last year’s, but that the results are still not at the they should be.