22 families cut off by flooding in Georgia’s Guria region

22 families cut off by flooding in Georgia’s Guria region 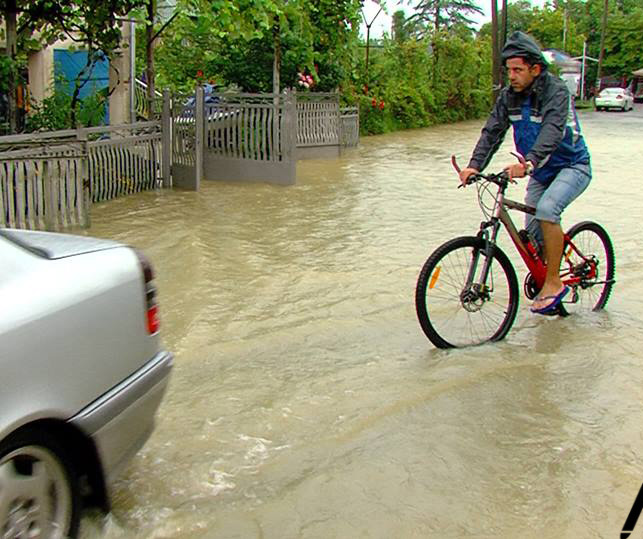 The flood struck the village Ureki in the middle of the tourist season. (Interpressnews.)

TBILISI, DFWatch–22 families are cut off from the outside world due to flood in the village Chanchati, in Georgia’s western Guria region.

Gulnara Chichua, government trustee in the village, told journalists that the flood also has affected other villages in Guria, and that bridges and cornfields have been destroyed.

“We have informed the Ministry of Infrastructure,” Zaza Urushadze, head of Lanchkhuti local government says.

He added that footbridges and bridges which were restored after the flood two weeks ago, were again damaged, as were part of the roads. Clean-up work after the previous flood finished just three days ago.

“We have seen nothing like what is happening this year. There always have been rain and disasters, but nothing like this. Everything that withstood the flood two weeks ago, was destroyed today. We don’t have nuts and corn. The winter will be hard,” Interpressnews quotes local villagers saying. They ask the government for help.

All of Sunday, emergency crews had difficulties assisting the local population in flooded villages, as the rain didn’t stop. In Ureki, a sea resort in the Guria region, they helped getting cars out of the water, but were unable to help remove the water, as the level was rising.

There was also a landslide in Ureki, causing further problems. Guests who come to Ureki to spend their holidays at the sea, left the borough.

“They packed in the morning and left, all of them, also my neighbors’ guests. Who would stay in one meter high water,” local resident Luisa Dvalishvili told Interpressnews. “The canals weren’t clean. Water is running into our houses. No-one is solving our problems. Everything is damaged. The poultry is dead.”

Locals demand that at least water canals are cleaned up.

“They speak of Ureki as a resort. What resort, if during every rain it becomes like Venice?” she says, adding that many of them have bank loans and had planned to pay their installments during the tourist season, but the guests left.

Kote Sharashenidze, the gamgebeli of Ozurgeti, says canals were cleaned after the previous flood two weeks ago.

“No canals will handle 24 hour rain,” he said, adding that during the last months there has been heavy rains causing flood already several times, especially in Ureki.

Government commissions have already been appointed after the previous flooding, and the amount of losses will be known in about three days.

The rain continued all of Sunday. Emergency crews will continue clean-up work until it is over, and a government commission will be estimating the cost of the damage.

Weather forecasters predict the rain to continue on Monday in Guria.