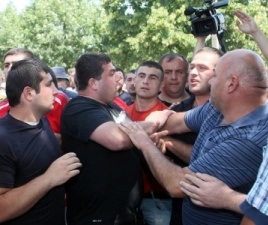 The opposition says it was staged, while the ruling party says the scuffle was an understandable reaction to Ivanishvili's claim that Georgia started the 2008 war. (IPN.)

TBILISI, DFWatch – A scuffle broke out Tuesday while opposition billionaire Bidzina Ivanishvili was campaigning in a small village near Gori.

His opposition Georgian Dream movement says the scuffle was caused by pro-government vigilantes, but the ruling party says it is understandable that villagers living close to a Russian checkpoint get angry over Ivanishvili coming there, since he says that Georgia started the 2008 war.

Ivanishvili was joined in the village Mereti by Irakli Alasania, Free Democrats leader when one of the listeners said she was a local and was opposed to the businessman coming to her village. She said she considered President Saakashvili “our God”.

Footage shown on Channel 2 showed how Ivanishvili then engaged in debate with the woman, who eventually conceded that she was not a local, but had come there for the event.

Ivanishvili also debated others who said they were against his being there.

Then a fist fight broke out, which led to several persons being injured, including women, Interpressnews reports. Journalists also got entangled in the scuffle, and several cars were damaged. Alasania and Ivanisvhili left, in order to avoid further trouble.

Later the Free Democrats party said that the scuffle was caused by local employees of the emergency service.

Tamaz Shioshvili, who is regional leader of Free Democrats, told IPN that the representatives of the emergency service became anxious because of the large number of people who had come to the meeting.

“There are 450-500 households in Mereti. About 300 people came to the meeting. Then a group of vigilantes created by the government, the Department of Constitutional Security and other bodies, came and started fighting,” Shioshvili said.

Later Giorgi Bukhrashvili, a detective working in the Interior Ministry, said police had identified persons participating in this incident and appropriate measures will be taken.

Speaker of Parliament Davit Bakradze later made a statement in which he said he could understand that people in Mereti were provoked by Ivanishvili coming there. He pointed out that they have a Russian checkpoint just a few hundred meters away, and he said he could understand that it must be difficult for them to hear someone say that Georgia started the 2008 war or that it has caused the Russian occupation of the breakaway territories.

“To these people, just like many others in the whole country, this accusation and these words is like a continuation of Kremlin policy and protecting the interests of the occupant in Georgia,” the Speaker said.

He went on to call for people to show restraint and avoid further incidents.