TBILISI, DFWatch – An independent TV station in Tbilisi was taken off air Wednesday morning, the day after businessman Bidzina Ivanishvili was on live from their studios.

Many regard what is happening as interference in the work of the media and as a response by authorities to a new political reality after Ivanishvili declared his wish to enter politics.

The crisis at Maestro TV started when current manager, Erosi Kitsmarishvili, also a well-known politician, broke into their premises Wednesday morning before work had started and tried to arrange a meeting with the staff to give instructions. When the staff refused to take instructions, saying they would not be influenced by a politician, Kitsmarishvili declared he was firing the station’s producer Mamuka Glonti, its director Ilia Kikabidze and one other in the management, effective immediately.

Glonti, who also owns part of the station, is disputing Kitsmarishvili’s right to fire him. During the scuffle, a Maestro employee called the police, who upon arriving sided with Kitsmarishvili. They set up a perimeter and blocked more staff from entering thereby preventing the normal operation of the TV station, which has for the last years been a rare voice of independence in the country’s television sector.

After a few hours off air, broadcast was resumed from inside the locked studio, where Glonti and a few of the staff tried to keep the station alive, frequently switching to the building’s surveillance cameras for additional footage of what was happening.

According to Kitsmarishvili”s account, he arrived to the Maestro building early in the morning, but the door was closed so he had to climb over the wall to get in.

He says that he has the right to intervene in the management of the channel, because he has attracted 4.5 million dollars for the development of the television. He said he had fired Mamuka Glonti, the co-founder and producer at Maestro, general director Ilia Kikabidze and Levan Chikvaidze. Kitsmarishvili says they have a share in Maestro channel so they had been fired in their capacity as staff members, not as shareholders. 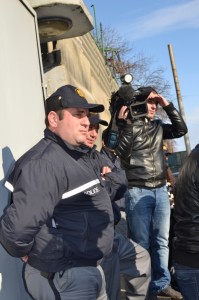 Police blocked journalists from entering Wednesday morning. They later gave them access to the yard, but not the TV studios. (Photo is copyright DFWatch.)

Kitsmarishvili was let into the Maestro building to make the statement.

“I was going to come here yesterday. But there was a big expectation of Ivanishvili being here. After yesterday’s program I arrived here early in the morning and began implementing rights granted by the law.” – He said.

Later Mamuka Glonti managed to enter the building together with the journalist Shalva Ramishvili and Press Association representative Eliso Chapidze.

Maestro has now stopped their regular broadcast, but is showing live images of the police blocking their studio entrance and crowds, interrupted by brief updates on the situation, some by Glonti himself. He appealed to the audience and compared the situation with the storming of Imedi TV in November 2007, calling today’s events ‘Imedi 2’.

Mamuka Glonti says there is an attempt to close Maestro. He is now locked into the studio and says he doesn’t know how long he will stay there. Police are physically preventing other journalists from entering the building.

Glonti calls for support from  media representatives and the public. But he asks not to panic and no demonstrations are needed.

Erosi Kitsmarishvili took over the management of Maestro for a three year term in November 2009. Recently he has expressed the view that Maestro was dedicating too much air time to the events surrounding businessman Bidzina Ivanishvili’s political campaign to remove president Saakashvili from power. Tuesday evening, Ivanishvili for the first time went live on air from Maestro’s studio.