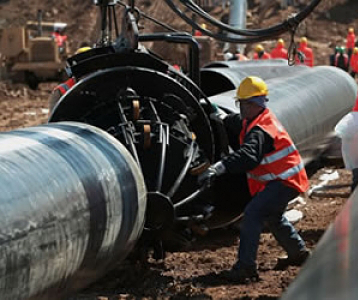 Their demands are to increase their reduced working hours and reduced salaries, and to get paid for working on weekends or be allowed not to work on Saturday and Sunday.

Workers blocked a road leading to the management office and prevented people from entering, according to Samkhretis Karibche, a local media outlet.

Samkhretis Karibche reported later the same day that 30 workers have been fired.

“We asked them why we were fired and whether the strike was the reason,” one of the workers said after meeting with the human resources manager of the company Bechtel and Enka. The latter only showed the list of fired workers without further comment.

A few hours later, seven of the 30 sacked workers were given their jobs back, but they all went back on strike.

The construction is is in the settlement Vale. Workers warn that if their demands are not met they will block a nearby border crossing with Turkey.

During the day, representative of the local municipality and MP Vazha Chitashvili from the parliamentary minority promised workers to contact the company managers and help solve the dispute.

Workers decided to dissolve in the middle of the day and resume the strike the next day, but later they learned that the management forced 19 of the fired workers out of the hotels they were staying at during work. These workers had come from Tbilisi, Rustavi and Gardabani to work on the project and the company had rented hotel rooms for them.

The strike will likely resume on Thursday, as workers are determined to carry on until their demands are met.

Their salary was recently reduced from GEL 600 to GEL 400 because their working hours have also been reduced. Workers also do not like food menu at the company.

BP is in charge of this project of  South Caucasus and Bechtel and Enka is the contractor company.

A 56km long pipeline and three surface facilities are being constructed as part of the Shah Deniz project. Work started six months ago.