$2 mill of emergency aid for 2008 war still stowed away

$2 mill of emergency aid for 2008 war still stowed away 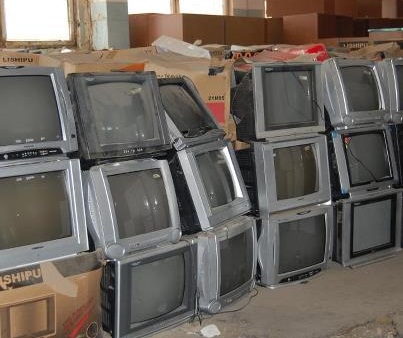 TV sets were among the aid found. The items were meant for refugees in the 2008 Russia-Georgia war. (Photo published by the ministry.)

TBILISI, DFWatch — The Ministry of Refugees and Internally Displaced People has discovered five unregistered warehouses, where there were kept humanitarian aid which should have been distributed to refugees in 2008 and 2009.

The ministry on Friday published photos and videos which shows the undistributed goods, which includes furniture, various equipment and food.

“There are almost all types of household things, equipment, like refrigerator, TV, stove, buckets, blankets, food – buckwheat, pasta, salt, and hatchets, hammer, mattresses, blankets, pillows, carpets, etc. I was told that there was a statement showing this is a depot, but more than 80 percent isn’t valid for using any more,” Refugee Minister Davit Darakhvelidze said on Friday, adding that the total cost of the products is about USD 2.1 million.

The ministry has sent a file of documents about the case to the Prosecutor’s Office for further investigation.

He said the Chamber of Control or the Audit Service have checked the activity of the Refugee Ministry twice during the last four months, but they haven’t revealed the existence of those warehouses in their reports.

The aid should have been distributed to people who left their houses in the Russia-Georgia war in August 2008.