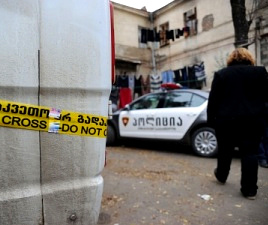 TBILISI, DFWatch–A policeman was shot and killed on Wednesday outside the police station in Telavi, a town in Georgia’s eastern Kakheti region.

The officer, Gela Lamazoshvili, died on the spot.

A female police officer was also injured in the shooting and brought to the hospital in Telavi in a serious condition, Intepressnews reports.

According to the news agency, the suspect, a 19 year old man, first shot the female officer and then Lamazoshvili.

Witnesses say the suspect was carrying a machine gun.

Interior Minister Giorgi Mghebrishvili is currently on his way to Telavi.