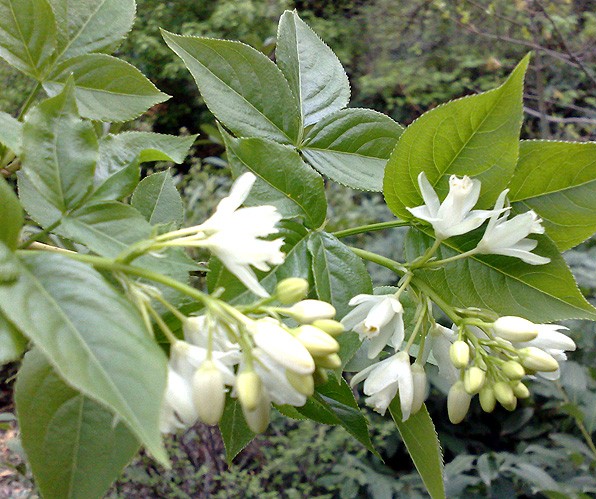 Jonjoli, or bladdernut, is a shrub used for cooking which may be harvested and sold in the market. (Ministry of Environment Protection.)

TBILISI, DFWatch–17 Georgians were released by South Ossetia on Wednesday. They had all been detained on the border when they were out picking jonjoli, or bladdernut, a shrub used for cooking which may be sold in the markets.

Now is the season for picking jonjoli, and so far in May, 26 people have been detained by Russians patrolling the border in villages mostly around the town Sachkhere. 15 of the 17 released are from somewhere near Sachkhere, and two are from the vicinity of the town Khashuri, also in Imereti.

One person currently remains in detention in Tskhinvali. He was detained on Tuesday in Dusheti. Tamaz Gigauri, 30, from the village Petriaanti, was out looking for cattle in the evening.

Vaso Kiladze, one of those who were released on Wednesday, told Channel 1 he was detained while picking jonjoli. Russian soldiers approached him and took him without asking any questions.

Kakha Kvizhinadze, who also was picking jonjoli, says he saw no sign of any border at the place where he was detained.

Usually detainees are released after paying a 2,000 Russian ruble (USD 60) fine, but the 17 Georgians were released without having to pay a fine.

EU Monitoring Mission welcomed the release of the jonjoli pickers.

“The Mission expresses hope that maximum consideration will be shown towards ‘jonjoli’ pickers and that such detentions will be avoided in the future,” EUMM’s statement says.