13 in hospital after opposition rally turns into street fight

13 in hospital after opposition rally turns into street fight 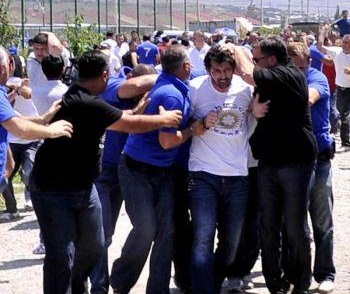 Georgian footballer Kahki Kaladze was among the Ivanishvili supporters who were thrown stones at Thursday in a village near South Ossetia. 13 ended up in hospital. (IPN.)

TBILISI, DFWatch – A street fight broke out Thursday during an opposition meeting in a Georgian village.

The scuffle involved both journalists and others being beaten.

Present at the rally were some of the opposition movement’s most well-known faces, Kakhi Kaladze, former football player, and Sozar Subari, the former ombudsman.

The fight developed when a group of locals verbally abused the Georgian Dream activists and started throwing stones. Several ordinary people were slightly injured. A journalist was also beaten, and later transferred to a hospital.

In all, thirteen people were hospitalized after the fighting, according to the ombudsman’s office.

The Interior Ministry responded with a short statement saying that an investigation has been launched and the police has identified the participants in the incident.

The editor of a local online news website — qartli.ge — was also beaten. He told journalists that he recognized local municipality employees among those who beat him. Those were Gigi and Gogita Gochashvili.

Info9, an online news service run by Georgian Dream, reports that their journalist and camera-man were also beaten.

An information agency from Kakheti that was covering the event reported that witnesses say that also female employees of the municipality were beating women who supported the opposition.

“The beating lasted 5-10 minutes. Then they followed us along the road. They followed people to the highway and again started throwing stones, destroyed car windows. Then they went after Info9 journalist and camera-man,” Ick.ge quotes Saba Tsitsikashvili saying.

Info9 reports that they broke and took away a camera which belongs to Info 9.