After years of crime rule, number of robberies finally drops in Gali

After years of crime rule, number of robberies finally drops in Gali 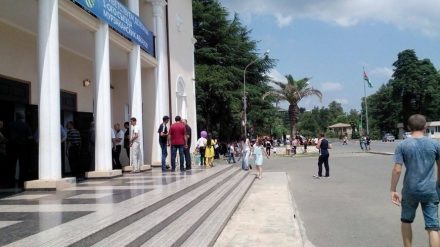 GALI, DFWatch–In the past, robberies were rife here in Abkhazia’s easternmost region Gali, which is predominantly inhabited by ethnic Georgians. But recently, the crime situation has noticeably improved.

DFWatch talked to people in Gali about how their situation has changed the last few years.

Before, robberies and kidnapping occurred almost every day in Gali and surrounding villages. People lived in constant stress because no one was insured. Compounding the problem, Sokhumi authorities would regard ethnic Georgians as ‘aliens’ and, in some cases, even as ‘enemies’.

There may be several reasons for the positive changes lately. Some Gali residents think the crime reduction is connected to the brown marmorated stink bug (BMSB) epidemic, which devastated the hazelnut harvest, the main source of income for the locals.

“We do not have hazelnuts, son, and we have nothing else. Who would come here [for robbery]?” a 75 year old woman told DFWatch.

Others believe the reduction in crime is connected to the arrest of several high-ranking Abkhazian de facto policemen, who, in their opinion, were protecting the local mob.

There are also those who believe that the decrease in the number of robberies is related to the neutralization of several of the most active criminals.

Regrettably, the problem still persist, but is much lower than what it was before and the change is noticeable, locals say.

“A few days ago, a robbery occurred in broad daylight in Tagiloni [village]. They took all the electronics – a refrigerator, washing machine, TV set, telephone, even an iron. There was nothing left in the house. No one expects a proper investigation, but the general situation has changed, because robberies used to occur almost every week, sometimes even three or four times in one night. Many of these were accompanied by murder and brutality,” she said.

Some stories which the locals recall in conversation with DFWatch (we deliberately write only initials of our respondents):

R.A.: “Our family was robbed three times in a single year. To be more precise, on one occasion they managed to enter the house, twice they attempted in vain. When they came the first time, we were caught by surprise, unprepared, but we still managed to resist and call our neighbors for help. Although the head of the family was wounded with a knife and the other two family members wounded by firearms, they couldn’t take anything. The neighbors made noise and the robbers fled. They were after hazelnuts. Since our neighbors’ houses were burned during the war, they stored their hazelnut harvest in our home. On the second floor of the house there was about two tons of hazelnuts. After this accident we have equipped the windows with steel grids. We also obtained a [hunting] gun and are trying to be more vigilant. The other two attempts failed as the robbers were deterred by gunshots. However, in the course of a week our close neighbor was robbed and the robbers took a very large amount of nuts from the house.”

V.B.: “It was an early evening. The dogs started to bark and did not stop. It was quite dark and we saw only silhouettes. We were so scared that we didn’t dare leave the house and watched from afar. Some people were going in and out of the house, but what really happened we learned early in the next morning. The owner of the house was tied down and the entire nut harvest was taken [by a cart]. The Abkhaz police were trying to trace the cart, however, as many other cases it also ended up in vain. To be honest, I don’t recall a single time when the Abkhaz police properly investigated a case of robbery. That has not happened yet, even though almost every week, sometimes even twice a week, criminals rob families.”

B.G.: “We have large fields of hazelnuts and the harvest is certainly going well. For this reason, my family was robbed three times. In two cases they took everything that we had in the house – appliances, gold, money, nuts. The third time, we started shooting and they fled. Nothing was taken, but our kids were severely stressed and we were forced to leave the house and relocate to Tbilisi for the sake of the children’s safety.”

K.L.: “My relative had a wedding and as it happens in villages, all the neighbors helped them. When I was coming back home late at night, I was kidnapped for a couple of days, during which I was constantly beaten. They asked my family for a ransom. It started with thousands [of dollars] but eventually they released me in exchange of a much lesser amount which was affordably to my family. I had to resort to psychological rehabilitation, but several months later I returned and now live here.”

F.D.: Our family have a small kiosk in the yard. We sell sunflower, cigarettes, soft drinks, ice cream and similar goods. At night we heard noises from inside, but were so scared, we didn’t go out of the house. The next morning we discovered that the door was broken open, and all the goods were taken away.”