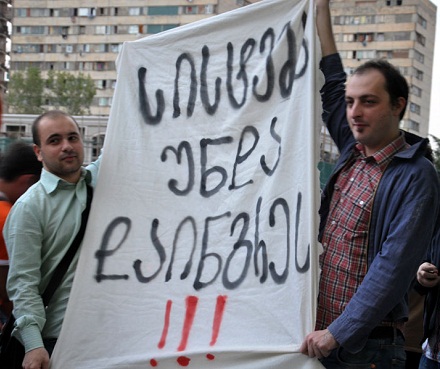 The newspaper Asaval-Dasavali published the names and address of all prison employees at the scandalized Gldani prison. Students protested against the naming Friday. (DFWatch photo.)

TBILISI, DFWatch — Protests continue after a Georgian newspaper published the names of employees at a prison scandalized by revelations of torture.

On Saturday evening, a well-known writer who has been engaging in the protests was attacked and beaten.

Asaval-Dasavali, a popular tabloid often criticized for xenophobic and hate-speech articles, a few days ago published a list containing full name, address and date of birth of all employees working at Prison Number 8 in Gldani, where most of the death and torture cases in the prisoner abuse scandal took place.

Part of society in Tbilisi protested and said it could create a serious danger for families of the employees, who don’t have anything to do with the torture.

Zaza Burchuladze, a well-known writer, joined a small protest rally October 3 outside the office of the newspaper. Staff of the newspaper came down to talk to the protesters, but the conversation developed into a loud-voiced quarrel. The students left, accompanied by clapping from the editorial staff and several Georgian Dream supporters, priests and readers.

The next day, the writer was invited to appear on a talk show on Maestro TV together with the editor of the newspaper. The discussion was heated.

“Ever since the show social network is full of threats,” Liberali quotes him.

The writer has a brain concussion and is receiving medical treatment.

Students, artists, writers and singers on Sunday planned protest rally at the place where Burchuladze was attacked.

READ ALL ABOUT THE PRISONER ABUSE SCANDAL HERE