What can Georgia learn from African conflicts?

What can Georgia learn from African conflicts? 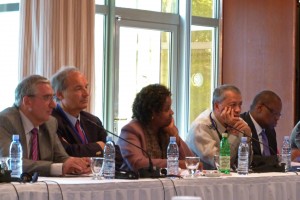 TBILISI, DFWatch – A series of discussion was held in Tbilisi on Tuesday to review conflict problems in Georgia. Comparisons were made between “good” and “bad” conflict case studies in various African countries with those in Georgia.

The main topic of discussion was effective ways that conflicts could be resolved, including alternative conflict resolution models. Representatives of various non-governmental organizations working on conflict issues took part.

Guests from foreign countries represented different models of solving conflicts in different countries. The forum was held under the auspices of Global Partnership for Prevention of Armed Conflict (GPPAC), which organized the meeting. The event was supported by Dutch Ministry of Foreign Affairs and Swiss Federal Department of Foreign Affairs.

Emmanuel Bombande, GPPAC chair and West Africa Regional Representative, also Executive Director of the West Africa Network for Peace building opened the discussion and noted that “conflicts are more common between states at this time than previously.”

One of the main problems, according to Emmanuel Bombande, is ways to develop consensus between parties – government and society, making it easier for people to gain access to different sources and how such resources are distributed; this included ways that power is distributed in conflict resolution.

In Africa, he says, “there are some governments where only one person, the president, is deciding how to spend state money, how to distribute powers, which naturally causes dissatisfaction and results in various conflicts.”

Emmanuel went on to suggests ways of building state institutions, which are impartial in terms of their relations with government, and now it is essential to speak with people who are actual parties to the conflict.

Often international organizations become actively involved in solving conflicts in the regions, albeit then countries start turning to such organizations to take the lead. Based on actual experience in the sphere of conflict studies, he says “it won’t solve the conflict; those people come from outside; their help is important but it is crucial for people in the conflict and government to get involved in the process. They need not depend on foreign hands as outsiders may not understand the problems.

Regardless, he adds, “It’s possible to prevent violence, but you have to wait. Even when one has access to power, that access should be observed, as power gets distributed on a daily basis and that needs time to complete.”

Paul Van Tongeren, GPPAC Honorary Chair says that often, governments lack good structures that are able to deal with conflicts; they are not well-organized, while often they may have effective structures in education, health-care or other fields.

He says it’s necessary to have respective leaders on different levels and leave room for cooperation with government and people, opposition and other parties.” Various participants told how there can be different kinds of conflicts, caused by elections for example, or ethnic based differences.

Elections are often events that result in conflicts, Paul Van Tongeren says that during this process many groups become involved and they cause problems. One of the most important roles in solving a conflict situation is played by so-called peace councils, which are located in different regions of the country. These councils have mechanisms that can prevent conflict, to calm people down; they are also called District Peace Councils, he says. Examples were given on countries like Kenya and it was noted that conflicts are less common in the regions where peace councils exist.

Gus Miclat, GPPAC Southeast Asia Regional Representative and Executive Director of the Initiatives for International Dialogue considers it important to involve regional organizations in the process, also meeting with people, engaging partnership that connect society with governments and also engagements of the actual victims of conflict.

Florence Mpaayei, GPPAC Eastern and Central Africa Regional Representative in her talk used examples taken from Kenya. She also spoke about having Local Peace Committees and how these committees are made up of people who can communicate with all sides; as such, they able to maintain close relations with various groups in different districts. Florence placed emphasis on the importance of speaking with people and regional organizations, albeit doing only this alone is not enough; that is why it is necessary to understand what is going on in the circle, on the people’s level, and until such time the government gets involved. She concluded by saying that “Government must play its role in preventing conflict.”

Ketevan Tsikheilashvili, director of Liberal Academy Tbilisi, asked the guests “about the role of the media in this overall process; publicity of the process.”

Emmanuel Bombande explained that “one of the main focuses is media to immediately involve editors and the leaders of TV channels. He gave one example, when UN allocated money to buy video cassettes and hire a group to record political advertisements for each political group. They then all took cassettes to national broadcasters and requested equal time for everybody to feel they’re covered and they had equal conditions in the media.

Another unnamed participant told how in Georgia that the various unresolved conflicts (Abkhazia and South Ossetia) are actually between Georgia and the Russian Federation. Moreover, he added how things are different here, as Georgia has to deal with the bear to the North, which interrupts efforts to find solutions to conflicts; Russia always supports separatists. He asked whether countries that the guests represented have to deal with such a bear or elephant that goes about interrupting conflict resolution processes in their experiences.

In response Emmanuel Bombande told that there are even worse troublemakers than a bear for African countries – as there, almost every state was colonized and far more influence is being applied on those countries from outside in terms of colonization.

That’s why it is crucial to organize and order systems inside a country, to make processes more transparent and to eliminate corruption. Otherwise the so-called bear will take advantage and use disorder and the country’s bad situation to its advantage; things will become even worse.