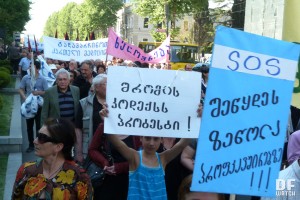 The banners read "Protest against the labor code" and "Stop the pressure against the trade unions". (All photos: Mari Nikuradze.)

TBILISI, DFWatch – Thousands gathered Tuesday in central Tbilisi to celebrate the International Worker’s Day, May 1 and demonstrate in front of the parliament building.

Protesters adopted an appeal to the president, government and parliament. They call on authorities to address all the issues concerning the social and economic rights of the population and urge them to take immediate steps for the improvement In social conditions.

Emilo Gumberidze is a former metallurgist. He remembered conditions he had to work for years. Metallurgists in Georgia aren’t often given proper uniforms; it’s unbearable to work in ordinary clothes for more than 8 hour shifts.

“For three months they have only paid part of the salary, it’s not fully covered and workers have unbearable conditions and we will do everything to protect their labor rights,” he says.

People started gathering at 16:00 on Rose Revolution Square in the center of Tbilisi. They started moving towards the parliament building holding colorful posters with different messages like ‘we demand labor conditions appropriate for humans’, ‘students for justice’, ‘amend the labor code’, ‘stop pressure on trade unions’ and ‘save Georgian medicine.’

Four drummers dressed in colorful clothes led the demonstration the whole day, together with actors on Castillo in different costumes.

The main goal of the protest is once more to attract government’s attention to amend the labor code, organizers say.

“That repressive law should be changed, anti-human, anti-people law, which is called our Labor Code, which was fabricated as if to create a fertile environment for investments in Georgia, but in reality it is one more reason for harassment of labor workers,” a representative of the medical trade union says.

Georgian Labor Code was amended in 2006. The amendments led to criticism from local organizations, legal experts and the opposition, but also from international organizations. EU and the International Labor Organization have many times criticized it and made recommendations to amend the code, but it remains the same. The main goal of the changes is to create a comfortable environment for foreign investors and attract investments. The code reduces an employers’ responsibilities to a minimum and doesn’t give many rights to an employee.

One of the main parts of code which is criticized, is that it gives authority to fire employees any time, for any reason, without even explaining the reason.

Lately there took place a mass-firing of teachers in different regions around Georgia. Teachers claimed they were fired because of their political views and activism.

The security of laborers, especially those working in a dangerous environment, isn’t protected and compensation procedures aren’t well defined in the law.

An appeal adopted by protesters today, partly by collecting signatures, and partly by verbal agreement during the rally, contains 9 points, including violation of metallurgists’ rights, unfair Labor Code, hard social conditions, health insurance for students; and the new system of making a household’s waste fee dependent on its electricity consumption.

The rally ended at Alexandre’s square near parliament with a small concert and free beer for protesters.