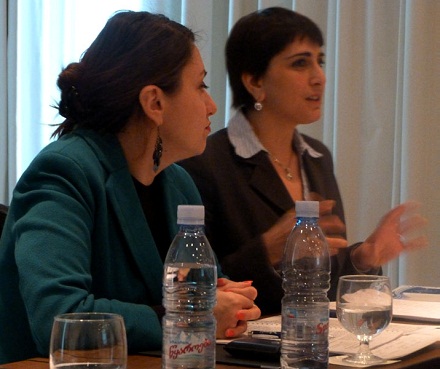 Tamar Kordzaia (right), one of the young lawyers who worked on the proposals, says the aim of the report was to listen to different ideas about making the media watchdog independent and transparent, in preparation for a bill in parliament. (Photo: Mari Nikuradze.)

In a study GYLA found that Ckikovani had refrained from acting against TV stations that showed more commercials than the rules allow. As 35% owner of the largest advertisement firm Magi Style, he stands to benefit from his own inaction.

Now GYLA proposes a set of changes to make sure that future commission members will be more independent.

Today, the Georgian president suggests three candidates to parliament, which then chooses one among them. GYLA proposes to appoint a group of media workers to find candidates for serving on the commission, instead of the president singlehandedly doing this.

The group also proposes an option to have members of the communications regulatory commission dismissed, if twenty thousand signatures are gathered in support of such a demand.

Another safeguard they propose is that any commission member shouldn’t have worked within the media for the last five years before joining the watchdog.