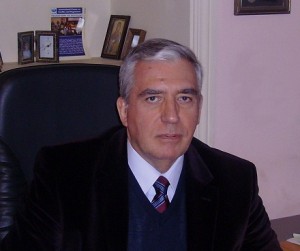 President Saakashvili in his recent address to the Parliament referred to the entire opposition as ones locked in a virtual world who have completely lost touch with reality. Interestingly, the ruling team has crafted a virtual reality of another nature, one that manifests itself to an outsider as a mysterious noumenon, Ding an-und-fur Sich (following Immanuel Kant: ‘by and for itself’), writes George Khutsishvili, director of the International Center on Conflict and Negotiation.

A sourcerer’s stone carefully calculated and allowing them to survive and strengthen against all odds. The ‘rose revolution’ was hoped to create a chance of securing the transition to democracy. This hope has long evaporated. Never since regaining of independence has there been a greater alienation between the power and the people; yet figures show that all the discontent always happens within a minor fraction of society, thus forging an illusion that the ruling party is strongly supported by the majority of people.

After the presidential address to parliament February 28, there is practically no question left about expectability of the ‘formal transition of power’ mentioned by President Obama. Anyone can explicitly derive this from Mikheil Saakashvili’s speech. After almost two full terms in power, he does not even express himself in normally expectable forms like “the next team in power will continue and build on what we have done”, thus leaving a space for a fair judgment, or say, “whoever the Georgian people will choose to elect will complete the reforms”. On the contrary, power instinct apparently dictates that whatever is publicly said should not leave a chance of liberal, pluralistic or inclusive interpretation. What should resonate in people’s ears is a clear message that not only the same policies will be protracted indefinitely into future, but also by the same people in power. After having had this pattern repeat itself for years, shouldn’t the West finally hear the bell ringing that these guys are no democrats and do not intend to build a democratic state?

Reacting to remarks from the parliamentary opposition, Mikheil Saakashvili once again confirmed he cannot react to criticism in a form appropriate for a leading statesman. Praising his team for the huge progress in developing the culture of political debate, he at the same time calls an opposition MP ‘a clown’ and promises to drench him ‘in healing mud’. Similar outrages have happened too many times to appear as a slip of the tongue. It is rather a policy of ‘we do what we will, and no one in the world can stop us’.

Another tell-tailing scene was a long and overwhelming applause with everyone standing up – a déjà vu of the Brezhnev times – after a session that should have caused grave questions instead. Many of us have already been through times when truth, justice and progress were all the monopoly of one party, and everyone was left with a choice of joining in, or being marginalized. Is not the same happening here and now? We are dealing with an outrageous and extreme case, to which the outside reaction is also outrageously weak and sluggish. What is the mystery behind this?

The gimmick has been based on comparison to a worse case against the level of global urgency. Relativism was a key to success: anywhere in the Caucasus we have a hindered democratic transition, and Georgia looks better off compared to Armenia or Azerbaijan. Yes, it is seriously short of qualifying as a ‘beacon of democracy’, but who else does? There are long lists of states more and less democratic than Georgia, so why raise hell if it creates no direct threats to larger-scale stability? After all, it’s people’s choice to live with or fight against authoritarianism. As clever people like Fukuyama wrote, democracy cannot be imposed from the outside, it has to grow from within. At least, when the age of ‘color revolutions’ seems past.

A supporting stabilizing factor has been a mass mentality easily thrown into a nihilistic mode. While the Arab Spring has proven that even in countries with traditionally long-lived dictatorial regimes, millions can be mobilized via social networks to trigger political change; any petition or appeal in Georgia does not collect more than a few hundred signatures. Again, an outside observer may deduce from this this that any declared mass protest has really little support.

Two inconsistencies interact and finally synergize: both a Georgian layman and a development-providing international bureaucrat would rather prefer to remain low key or murmur in the background about their discontent with the current situation and the necessity of change, and refrain from publicly confirming their opinion. In the Georgian case, this works even for anonymous polls widely advertized domestically and abroad, further strengthening the once gained momentum. There is a lot of talk about the intimidation and total surveillance, yet can Georgians be seen as more intimidated than people under some Asian totalitarian regimes where they quite recently achieved a change by speaking up?

As soon as a critical mass of outspoken protest is reached, it both facilitates changes domestically, and fosters changes in international reactions. I am not sure this will happen already in 2012, but some day it will. In a society with an overwhelming unemployment issue, it may also take the form of a nationalistic upheaval. Hopefully it will not take the form of brutal and ruthless aggression against all, as soon as the ruling regime gets tired some day.