Village wanted water, got swings for the elderly

Village wanted water, got swings for the elderly 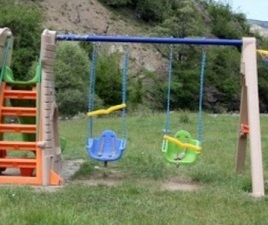 This "sports complex" was built in village Rkoni high up in the mountains. (Photo: Shida Kartli Information Agency.)

TBILISI, DFWatch – A swing was put up in a mountain village in Georgia, but no children are there to use it.

Next to the swing in Rkoni village, high up in the cool mountains, two elderly people, Nina Berdzeni and Mariam Chokheli are living alone, each in their own house.

A swing to play on is not their primary wish. The villagers say they would have preferred if the money had been spent on rehabilitating the water supply instead, according to Shida Kartly Information Agency.

The agency writes that the two women have to walk far from their houses to collect their drinking water.

Giorgi Salkhinashvili, trustee of the village, told the agency that the 2 200 lari allocated for the village this year wasn’t enough to install drinking water.

“The population requested rehabilitation of the drinking water system, but the money was not enough and so we preferred a sport complex,” the agency quotes him saying.

The story has been circulating in social media for the last two days. Today Manana Manjgaladze, spokesperson for president once again spoke about president’s initiatives ‘water to all villages’ and ’24 hour supply to all cities.’

At her regular briefing she said the president himself will address both initiatives soon.

“This is a program which will serve to improve the water supply to villages and regions.”