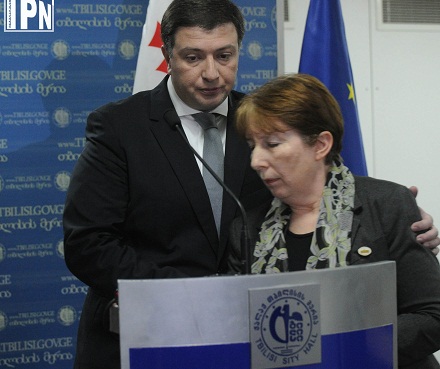 TBILISI, DFWatch–Vice Mayor Sevdia Ugrekhelidze will take over as acting mayor of Tbilisi, after a decision by Tbilisi City Court to suspend Mayor Gigi Ugulava.

Gigi Ugulava said on Sunday that this follows by law.

“According to Georgian law, the first vice mayor is appointed by the mayor from City Council and in case of absence of the mayor he or she fulfills duties of mayor,” he said. “I want the majority of the City Council to understand this, because their uncontrolled passion and dream was to take control over posts at the City Hall.”

Sunday, Tbilisi City Court explained its decision to suspend Ugulava by saying that if he stays in office this will interrupt the investigation.

Eka Areshidze, speaker of the City Court, said the court shared the belief of the Prosecutor’s Office that the charges are directly related to the activity of the Tbilisi mayor.

“The Court considered it reasonable to dismiss the charged person from the post in order to avoid interruption of the investigation,” Areshidze said, adding that the court has the right to discuss the issue about dismissing an official person through verbal hearing or without.

“It is common to discuss such type of mediation without verbal hearing,” she added.

Ugulava is charged with abuse of power in an embezzlement case involving Tbilisi City Hall money that was used for financing the 2012 election campaign of the National Movement party.

The Prosecutor’s Office also wanted to detain Ugulava, but the court disagreed and instead set a bail of USD 30 000.