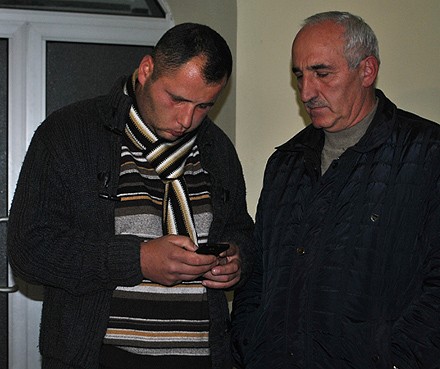 TBILISI, DFWatch–The National Movement has accused the governor of the southern Samtskhe-Javakheti region of physically assaulting one of its photographers on Thursday evening.

Nikoloz Khizadze claims he was heading to the village Muskhi to document a campaign meeting for the UNM’s majoritarian candidate Vazha Chitashvili, who is participating in the second round of the parliamentary election, when governor Akaki Machutadze’s car appeared and blocked his way.

Giorgi Baliashvili, head of the local renovation service, then allegedly beat him, took his camera and left the scene with the governor and 20 or 30 accompanying people, Khizadze claimed at a press conference in Akhaltsikhe.

He claimed that the governor verbally insulted him and the UNM branch office.

Machutadze denied that he was present at the scene, saying he was at his office during the entire day.

Police questioned Khizadze for three hours yesterday night. An investigation has been opened on the basis of article 178 of the Criminal Code about robbery.